Ten Principles of a New International Security and Development Architecture

Helga Zepp-LaRouche at the Nov. 22 Schiller Institute conference, “Stop the Danger of Nuclear War Now; Third Seminar of Political and Social Leaders of the World,” offered the following ten principles, upon which a new global security and development architecture could be founded. She added in her Nov. 24 webcast, “These ideas are meant to be food for thought and a dialogue among all people concerned to find a basis for a world order guaranteeing the durable existence of the human species.”

The new paradigm which will be characteristic of the new epoch, and towards which the new global security and development architecture must be directed, therefore, must eliminate the concept of oligarchism for good, and proceed to organize the political order in such a way, that the true character of humanity as the creative species can be realized.

Therefore, I suggest that the following principles must be discussed and if agreed upon be realized. These ideas are meant to be food for thought and a dialogue among all people concerned to find a basis for a world order guaranteeing the durable existence of the human species.

First: The new International Security and Development Architecture must be a partnership of perfectly sovereign nation states, which is based on the Five Principles of Peaceful Coexistence and the UN Charter.

Second: The absolute priority must be to alleviate poverty in every nation on the planet, which is easily possible, if the existing technologies are being used for the benefit of the common good.

Third: The life expectancy of all people living must be prolonged to the fullest potential by creating modern health systems in every country on the planet. This is also the only way how the present and future potential pandemics can be overcome or be prevented.

Fourth: Since mankind is the only creative species known so far in the universe, and given the fact that human creativity is the only source of wealth through the potentially limitless discovery of new universal principles, one of the main aims of the new International Security and Development Architecture must be providing access to universal education for every child and adult person living. The true nature of man is to become a beautiful soul, as Friedrich Schiller discusses this, and the only person who can fulfill that condition is the genius.

Fifth: The international financial system must be reorganized, so that it can provide productive credits to accomplish these aims. A reference point can be the original Bretton Woods system, as Franklin D. Roosevelt intended it, but was never implemented due to his untimely death, and the Four Laws proposed by Lyndon LaRouche. The primary aim of such a new credit system must be to increase dramatically the living standard of especially the nations of the Global South and of the poor in the Global North.

Sixth: The new economic order must be focused on creating the conditions for modern industries and agriculture, starting with the infrastructural development of all continents to eventually be connected by tunnels and bridges to become a World Land-Bridge.

Seventh: The new global security architecture must eliminate the concept of geopolitics by ending the division of the world into blocs. The security concerns of every sovereign nation must be taken into account. Nuclear weapons and other weapons of mass destruction must be immediately banned. Through international cooperation, the means must be developed to make nuclear weapons technologically obsolete, as it was originally intended by the proposal which became known as the SDI, suggested by LaRouche and made as an offer to the Soviet Union by President Reagan.

Eighth: In former times, one civilization at one corner of the world could go under, and the rest of the world would only find out years later, due to the length of distances and the time needed for travel. Now, for the first time, because of nuclear weapons, pandemics, the internet, and other global effects, mankind is sitting in one boat. Therefore, a solution to the existential threat to humanity cannot be found with the help of secondary or partial arrangements, but the solution must be found on the level of that higher One, which is more powerful than the Many. It requires the thinking on the level of Coincidentia Oppositorum, the Coincidence of Opposites, of Nicholas of Cusa.

Ninth: In order to overcome the conflicts arising out of quarreling opinions, which is how empires have maintained control over the underlings, the economic, social and political order has to be brought into cohesion with the lawfulness of the physical universe. In European philosophy this was discussed as the being in character with natural law, in Indian philosophy as cosmology, and in other cultures appropriate notions can be found. Modern sciences like space science, biophysics or thermonuclear fusion science will increase the knowledge of mankind about this lawfulness continuously. A similar cohesion can be found in the great works of classical art in different cultures.

Tenth: The basic assumption for the new paradigm is, that man is fundamentally good and capable to infinitely perfect the creativity of his mind and the beauty of his soul, and being the most advanced geological force in the universe, which proves that the lawfulness of the mind and that of the physical universe are in correspondence and cohesion, and that all evil is the result of a lack of development, and therefore can be overcome.

A new world economic order is emerging, involving the vast majority of the countries of the Global South. The European nations and the U.S. must not fight this effort, but by joining hands with the developing countries, cooperate to shape the next epoch of the development of the human species to become a renaissance of the highest and most noble expressions of creativity!

Let us therefore create an international movement of World Citizens, who work together to shape the next phase in the evolution of mankind, the new epoch! World Citizens of all countries, unite! 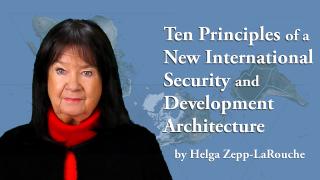