Nov. 22: Instead of War, Fight for the Vision of a Future

Nov. 18—“I speak of peace, therefore, as the necessary rational end of rational men. I realize that the pursuit of peace is not as dramatic as the pursuit of war—and frequently the words of the pursuer fall on deaf ears. But we have no more urgent task.”

The Schiller Institute’s meeting, “Stop the Danger of Nuclear War,” the third in a series, will be held this coming Tuesday, November 22, on the 59th anniversary of the assassination of President John F. Kennedy. The shadow of possible, sudden, total annihilation warfare, cast on the face of the planet this past week, as Ukraine (perhaps) accidentally bombed Poland, should underscore why every possible effort should be made, in the next three days, to elevate the voice of the Schiller Institute, and its founder Helga Zepp-LaRouche, in the world’s public domain. Zepp-LaRouche’s proposal for a new security and development architecture, recently published in an essay titled “The Role of the Non-Aligned Movement in a New Paradigm in International Relations,” is now the subject of study discussion by a growing list of present and former national congressmen and women, state legislators from various nations, and others, who will be participating in this Tuesday’s virtual gathering.

That path to peace, to be explored in the spirit of a new “Bandung II” Non-Aligned Movement, which opposes the organization of competing blocs of nations, is one that China’s President Xi Jinping and Italian Premier Giorgia Meloni spoke about, in the respective communiqués reporting their Nov. 16 meeting at the G20 meeting. Each spoke of the “one thousand years of contact and dialogue” between the cultures of Italy and China—a truly “special relationship,” not based on war, or business, but rather, on art, music, science and commerce. That path to peace, particularly as that path had been successfully carved out by Lyndon LaRouche in dialogue with President Ronald Reagan, and with the Soviet Union 40 years ago, through the LaRouche Strategic Defense Initiative proposal, is the proper standard in diplomacy that should prevail in American contact with other nations. It should replace the incompetent “amateur hour” process that has led Russian Deputy Foreign Minister Sergei Ryabkov to state that Russia must “continue to adhere to a policy of not informing anyone in advance about our plans in the military field. I am referring to our real adversary, a powerful opponent, in this particular case, the United States.”

Despair is not warranted. Take that next most dangerous moment in U.S.-Russia relations, the Cuban Missile Crisis. President John F. Kennedy and his brother Robert, refusing to bow to the pressure of a miscalculating “Utopian” military faction, had found themselves at the center of a potential thermonuclear firestorm that might have wiped out the human race. In a resolute display of leadership, JFK and his interlocutors in the Soviet Union walked the world back from the brink. This present circumstance, however, may be far more dangerous than that of 1963, because rational men and women are fewer and farther between, and harder to find in the trans-Atlantic sector, than then. Instead of reason, this week, a Joker-like once-comedian, playing the President of Ukraine, asked the world to start World War III. According to some reports, Biden refused to talk to Zelenskyy while “the affair of the missile” played out. Biden does not seem to have talked to him as of this moment.

Given what has been written by the City of London’s representatives in recent issues of The Economist, we cannot dismiss the possibility that this past week’s near-nuclear confrontation between the United States/NATO and Russia, was a mere dress rehearsal for what is to come, possibly this week, possibly next, or, perhaps in the period before the end of this year. This does not necessarily mean that a thermonuclear war is being planned for a certain day or time by British forces; it simply means that billions of the people on this planet are faced with the most nightmarish of prospects—that no one is actually in charge anymore, and thus strategic miscalculation would be also impossible to avoid. As Lyndon LaRouche asserted in a summer 1978 keynote address to the International Caucus of Labor Committees: “The British, in their infinite wisdom, miscalculated, and World War began.”

So, why, then not despair? It has been the good fortune of those associated with Lyndon LaRouche to have participated in an organization that was composed as a philosophical association in the image of the best of the citizen-soldiers of Athens, like Socrates, like Aeschylus, and not the citizen-soldiers of Sparta. It is the legislator Solon of Athens, not Lycurgus of Sparta, and Solon’s constitution composed as a poem, which is understood by members of The LaRouche Organization to represent the standard of practice of statecraft, through public meetings, street distributions, and political literacy through publications, pamphlets, and original research using original sources. Candidates for office are selected and encouraged with this standard in mind. For example, interventions, that is, interruptions in the unacknowledged but pervasive social acceptance of the banality of evil of the political class, are encouraged. Such interventions non-violently confront those who belong, not in the Congress, but in the dock of a newly constituted Nuremberg Tribunal (which began on Nov. 20, 1945), with public identification and public acknowledgment of their crimes.

The movement formed and led by LaRouche, through the Presidential electoral process, allowed LaRouche, through his Presidential candidacy, to play a role in American politics for a half-century that was unique, particularly for the way that profound ideas, the ideas of Nicholas of Cusa, Gottfried Leibniz, Bernhard Riemann, Alexander Hamilton, Edgar Poe, Friedrich Schiller, and many others, were made readily available to millions of people on street corners and in malls, airports and convention centers, in many countries, for some 50 years. It was largely due to this that LaRouche was able to organize a President of the United States to say, during his March 23, 1983 SDI speech: “I’ve become more and more deeply convinced that the human spirit must be capable of rising above dealing with other nations and human beings by threatening their existence. Feeling this way, I believe we must thoroughly examine every opportunity for reducing tensions and for introducing greater stability into the strategic calculus on both sides…. After careful consultation with my advisers, including the Joint Chiefs of Staff, I believe there is a way. Let me share with you a vision of the future which offers hope.”

It is generating, sharing and defending that vision of a future which offers hope, that is our task, and is the topic of the Schiller Institute conference of Tuesday, November 22. 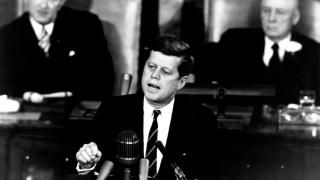