Nov. 13 -- At a moment in history when quality statesmanship is essential, the results in the U.S. midterm election reflect the absolute absence of such leadership.  On the leading issues facing the nation, the danger of a nuclear confrontation with Russia over Ukraine, and the rapid systemic collapse of the economic/financial system, candidates of both parties for the U.S. House and the Senate were silent, as they had no solutions to offer, and were too corrupt or fearful to challenge the establishment's lying, controlling narratives.

Hundreds of millions of dollars were spent to fill the airwaves with vacuous allegations, produced by public relations firms based on profiles used to further polarize the electorate.  Democrats charged that Republican (GOP) candidates are acting to "end democracy", accusing them of appealing to "right-wing, racist extremism"; for GOP candidates, the favorite issue was saving the nation from "socialism" or even "communism", including wielding the nonexistent threat of the takeover of the country by the Chinese Communist Party, allegedly facilitated by President Biden and the Democrats!  When it came to the economy, which polls showed was the most pressing issue for voters, it turns out that while both parties claim to be  "opposed to inflation", neither was able to articulate a compelling or competent program to address it.

The much touted "Red Wave", which was widely believed to be in the works due to the unpopularity of Biden -- that is, a sweep of both Houses of Congress by the GOP -- did not materialize.  With votes still being counted in 30 or so House races, the Republicans are poised to take the House of Representatives away from the Democrats, but by a far smaller margin than expected.  Current projections in the undecided races give the GOP at least 221 seats, a margin of 4 votes above the 218 needed to gain majority status.  But this falls far short of the traditional gains made by the opposition party in midterm elections (opposition meaning the party not holding the Presidency), which usually gains between 30 and 40 seats in midterms.

For comparison, in the 1994 midterms during Bill Clinton's first term, the Republicans gained 54 seats.  The midterms in 2010, during Obama's first term, the GOP gained 63 seats.  And in 2018, the midterms following Trump's 2016 victory, the Democrats gained 40 seats.  Each of these gains dwarf the totals picked up by the GOP in the just-concluded midterms.

The Senate remains in the hands of the Democrats, with only the race in Georgia to be determined.  The victories of Democratic incumbent Mark Kelly in Arizona and Catherine Cortez Masto in Nevada, which required nearly a week to count all the votes, leave the Dems in control of the Senate, making the runoff in Georgia less crucial, though still quite interesting.

Thus, the much-hyped Red Wave has been reduced to what commentators are quipping is a "purple ripple."

The potential existed for a dramatic transformation in U.S. politics, not between "Red" and "Blue" partisanship, but through addressing the systemic crises affecting voters due to the permanent state of war imposed by neocons in both parties, and the neoliberal economic policies, which are responsible for the deindustrialization of the nation, and the subsequent inflation.  Polls show that 78% of voters are "dissatisfied with how the government is functioning", and desired what one pollster called "an actual platform to support."

This unhappiness was expressed further in the lack of support for the ostensible leaders of both parties.  Pre-election polls found that 58% of voters hold an unfavorable view of Biden, while 51% have an unfavorable view of former President Trump.   Another poll shows that two-thirds of voters would prefer Biden not run for re-election, including 43% of Democrats.  With Trump insisting that the key issue in the midterms should be that he rightfully won the 2020 election, which he claims was stolen from him, many of the GOP candidates were reduced to a "Love Trump, Hate Biden" message.  The {Wall Street Journal} blames this strategy for the failure of the GOP to capitalize, stating in a post-election editorial that "Mr. Trump botched the 2022 elections."

This is amplified by the failure of Trump or his "America First" posturing to adopt a clear non-interventionist policy for the NATO war against Russia in Ukraine.  The U.S.-NATO commitment to continue to pour nearly unlimited funds into Ukraine, which is supported nearly unanimously by Congressmen in both parties, was briefly and mildly challenged by "Progressive" Dems, who backed down when challenged, and by House Minority leader McCarthy, who warned that a Red Wave could mean the end of a "blank check" to Ukraine -- but with the exception of interventions against War Hawks by activists associated with the Diane Sare Independent Senate campaign in New York, no candidates made the danger of the U.S.-NATO drive for nuclear confrontation an issue,

Both parties missed an opportunity to address the crises by choosing a path of partisan idiocy, rather than addressing the actual transformation which is occurring globally.  The state of permanent warfare and systemic economic collapse are the result of the demise of the Unipolar order, which the U.S. and NATO are trying to enforce by demanding that nations adhere to the "Rules-Based Order" (RBO), which requires that nations give up their sovereignty and submit to the demands of the City of London and Wall Street.  This has been enforced since the end of the Cold War by information warfare, assassinations, regime change coups and war.

But there is a rebellion against this order internationally, taking shape through advances in multilateral cooperation, with the emergence of the alliances of the BRICS nations, the Eurasian Economic Forum, and the Shanghai Cooperation Organization as among the most prominent.  Nations especially in the Global South are rejecting the "one size fits all-free market" economic model, and expressing openly their desire for a model which advances real economic progress, through applying advances in scientific and technological progress for mutual benefit through multilateral cooperation.  China's Belt and Road Initiative is gaining widespread support among these nations, leading to increasingly bellicose rhetoric against China from western War Hawks committed to profiting from the underdevelopment of these nations.

But with the exception of campaigns by LaRouche candidates Diane Sare for U.S. Senate in New York, and Joel Dejean for the U.S. House in Texas, knowledge of this global transformation -- which would benefit the U.S., if it would drop its military deployments on behalf of the mythical RBO and join in building this New Paradigm --was denied to American voters.  The censorship of the LaRouche candidates was combined with fear-mongering about Putin's alleged threats to use nuclear weapons in Ukraine, leaving voters to choose among candidates who uniformly, with few exceptions, support the weapons flow to Ukraine, and the U.S.-U.K.-NATO sponsored war to degrade Russia.

Not surprisingly, a huge chunk of the millions of dollars which flowed into their campaign coffers was provided by corporate cartel officials from the financial firms, Silicon Valley IT moguls, and defense contractors of the "Military Industrial Complex", while the media cartels participated by suppressing any discussion which threatens to expose the lying narratives of the War Hawks and neoliberals.

In the absence of candidates committed to unifying the nation in a mission to join the New Paradigm, through applying the tried and tested credit policies of the Hamiltonian system to rebuild the nation, the partisan divide continues, driven by the criminal cabal which controls both parties insisting on the need for a Great Reset and an anti-growth Green New Deal.  A similar existential political crisis dominates the nations of the fracturing European Union.  As angry citizens take their protests to the streets in the months ahead, demanding food, electricity, health care and liveable wages, the LaRouche movement will be there with a program which will allow them to participate in the global transformation of cooperation among sovereign states, which is underway. 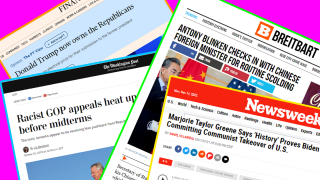