Suddenly, The Truth: Ukraine and the "Ibykus Principle"

On Thursday, July 28, a group of independent-minded writers, journalists and thinkers, most of them former participants in symposia organized by the Schiller Institute, began circulating the following response to an operation, launched by the multiple intelligence agencies of NATO, to discredit them and prevent their exposure of the true nature of the so-called “Ukraine conflict.” That statement reads:

“We, the participants in various conferences of the Schiller Institute, are accused of promoting ‘Russian propaganda’ on a list posted by the Ukrainian ‘Center for Countering Disinformation,’ which is officially part of Ukraine’s National Security and Defense Council, operating under the authority of the President.

“In times of war, publishing such a list is tantamount to targeting individuals. It is all the more unacceptable that the list agglomerates the names of many speakers, representing top institutions from around the globe, with diverse opinions, who are involved in a dialogue, searching to arrive at peace in the interest of all.

“To assume that such a wide array of speakers are all ‘Putin agents’ and can’t think for themselves, can only be explained by a belief in conspiracy theories, or as mere vulgar propaganda, or both. The key question is whether the listed speakers are promoting viewpoints consonant with the truth.

“Normally, this would be up to an audience to decide. But the U.S./NATO efforts to blacklist those that would offer any ‘alternative narrative’ on Ukraine, until now, remains unchallenged.

“So, hats off to Ukraine for providing a handy list of speakers who voice different ideas.

“Those interested in finding out the truth will now be better able to compare the official story—the ‘narrative’—with an uncompromised critique, determine which can bear close scrutiny, and decide for themselves which analysis is closer to the truth.”

Many of those who appeared on the “Ukrainian blacklist” have endorsed this statement, and other names are now being added.

This is no time to remain “an average person” to idly stand by as these crimes are committed in the name of “democracy,” and in the name of the United States—in your name. This is no time for those who know better, to squat and pretend that they are simply “the average person.” There is a way to both know the truth, and to fight for it. As economist and statesman Lyndon LaRouche asked, in his “The Science of the Human Mind”: “How is universal truth defined with certainty, and what are the human mind’s potentialities for ordered progress in discovering this universal truth?”

LaRouche’s life and work were the answer to that question. It was perhaps inevitable, that in this 100th anniversary-year of the birth of Lyndon LaRouche, the cranes of justice would once again circle above the heads of a world polity, and, as with the poet Ibykus, compel those that are now responsible for the greatest of crimes being committed against humanity, to unexpectedly speak his name, and thus, despite their intent, admit their nature, and their guilt. 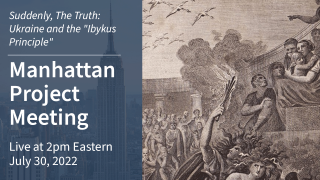 Panic from the War Hawks: "We Don't Have the Missiles to Stop China!"

Panicked cries for more money, more weapons, are coming from think tanks, Congress, defense officials -- We are not prepared for war with China!!!!!