Manhattan Project, December 3, 2022 — Ten Principles to Save a Self-Doomed Civilization

In today’s dying Anglosphere, where mass killing by war is touted as the only efficient policy for ending war, it is incumbent upon the forces of The LaRouche Organization and the Schiller Institute to seize the occasion of this Advent season (the time period spanning the four Sundays prior to Christmas) to reawaken in the trans-Atlantic nations a commitment to the once-celebrated mission of Christian civilization: the voluntary redemption of mankind, without guilt, and without recrimination. Ten Principles to establish a just and global security and development architecture have been proposed by Helga Zepp-LaRouche. These principles “must be discussed and if agreed upon be realized. These ideas are meant to be food for thought and a dialogue among all people concerned to find a basis for a world order guaranteeing the durable existence of the human species.” Surprisingly, the method by which this world harmony may be achieved is expressed in Classical musical compositions, such as the Dona Nobis Pacem. A proposal has been made by organizers to make Dona Nobis Pacem the international anthem for a movement to end war through economic prosperity and a cultural renaissance. 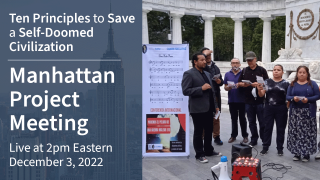