Nov. 30—China’s Science and Technology Daily reported Nov. 28 on the status of the Comprehensive Research Facility for Fusion Technology (CRAFT) being built at the Hefei University of Science and Technology. China, the report makes clear, is serious about meeting its goal of generating continuous fusion energy by 2028, for use in a hybrid fission-fusion power plant, and generating fusion energy directly for the electric grid by 2035. Materials and technologies needed to control fusion reactions are already being tested at CRAFT, a giant complex which will be fully completed by 2024, as part of the broader fusion project based out of the university, which is home to the superconducting EAST, or Experimental Advanced Superconducting Tokamak, and the Chinese Academy of Sciences’ Institute for Plasma Physics.

This is great news for everyone worldwide. The phenomenal leap in humanity’s power on Earth and in the Solar System that will flow out of mastering controlled thermonuclear fusion reactions has been known for decades. Lyndon LaRouche founded the Fusion Energy Foundation in 1974 to promote its advance, and by the time the U.S. government shut it down in 1987, the foundation’s monthly magazine, Fusion, was one of the most popular science magazines in the United States.

The development of a full-scale fusion powered-economy has taken as long it has for purely political, not technical or scientific reasons. The Malthusian, imperial oligarchy has been its mortal enemy, but when people understand the almost limitless progress which fusion power and its associated technologies can bring, Malthusianism is finished.

China is not only committed to developing fusion, but is bringing other nations in, to share in the development. Twelve days ago, China’s Institute for Plasma Physics announced that one of the institute’s four working tokamaks had been dismantled, packed carefully into six containers, and is now ready to be shipped to Thailand in mid-December, where it will be reassembled and put to work at the Thailand Institute of Nuclear Technology!

That act is a microcosm of a world order befitting humanity.

Imagine what progress could be made in improving the lives of every human being on this planet, were the United States, Japan, France and Germany—for example—to do likewise.

Instead, the as-yet-unshaken commitment of the Anglo-American powers and their European cohorts to their dog-eat-dog view of humanity continues to threaten the annihilation of the human species itself. Not satisfied with the devastation their war against Russia has brought upon the world (Ukraine emphatically included), are preparing for “the big one,” as U.S. Strategic Command head Adm. Charles Richard puts it: a war against China.

Today, the Pentagon released its annual “China Military Power Report,” declaring that China’s determination to complete “the rejuvenation of the Chinese nation by 2049” is what makes China a threat to the U.S. The day before, the U.S. Defense Intelligence Agency announced that it has established a “China mission group” to integrate all work done by the DIA on China, because China represents “an existential threat to the long-term success of the United States.”

The U.K. neocon thinktank, the Council for Geostrategy, has launched a campaign for His Majesty’s government to elevate its operations against China in the Himalayas region to the level of its commitment to its maritime Indo-Pacific “tilt.” Included in its recommendations, is fostering the India-China border conflict. Countering China was high on the agenda of the NATO Foreign Ministers meeting on its second day. NATO Secretary General Jens Stoltenberg and Secretary of State Tony Blinken declared before the meeting began today, that NATO is committed to standing together against China, as Stoltenberg bragged that NATO had been training and equipping Ukraine’s armed forces since 2014.

The U.S. military, for the third time, made an ostentatious show of one of its ballistic missile submarines, this time at the U.K.’s military base on Diego Garcia, in the middle of the Indian Ocean. Likewise, U.S. Strategic Command reported that earlier in November, it had carried out an exercise, Spirit Vigilance 2022, demonstrating that eight stealth bombers could taxi out and take off at once from a Missouri airfield.

And they complain that Russian and Chinese strategic bombers flew a joint patrol over the Sea of Japan and the South China sea today?

Where this is heading, is very, very frightening—and completely unnecessary. Human beings were made for something better; to cooperate in the development of each other, and taking joy in it. Let the citizens of the world take heart and join with the Schiller Institute in establishing a world order worthy of the principle that human beings are capable of governing themselves on behalf of all others. 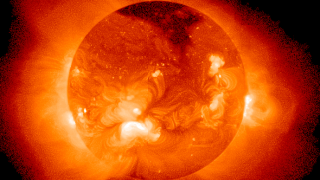