Nov. 12—The Schiller Institute held an international (online) symposium Nov. 12, titled, “The Physical Economy of the noösphere: Reviving the Heritage of Vladimir Vernadsky.” It was dedicated to reviving the name, method and mission of the great Russian-Ukrainian scientist Vladimir Vernadsky (1863-1945). The purpose, as the invitation stated, was to support scientists and inspire citizens, especially young people, the world over, to confer, “to improve the condition of mankind—to develop the noösphere.” The exciting seven-hour, two panel event featured presentations by 13 scientists, engineers and policymakers, with live discussion, including questions from the world audience. The speakers represented six nations—the U.S., Russia, Italy, Germany, South Africa and Egypt—with viewership numbering in the hundreds live, and fast on the way to multiple thousands since.

The first presentations were grouped under Panel 1, titled: “Vernadsky’s Revolution in Science and Thought”; the second panel was titled, “Physical Economy: Developing the Noösphere.”

Conference moderator Dennis Speed, of the Schiller Institute, opened the morning panel, identifying that Vladimir Vernadsky’s concept of the noösphere concerns the dynamic of how fundamental breakthroughs in mankind’s thought and practices, when implemented in the productive process, enhance the power and numbers of humanity in the biosphere. Thus, human thought is itself a geological force shaping the physical domain.

This concept is profoundly coherent with the methodology of statesman-economist Lyndon H. LaRouche, Jr., (1922-2022) who did much to make known Vernadsky’s contributions, especially among a taskforce of young people working in science, two of whom participated in the Nov. 12 symposium. LaRouche wrote two books of special note, in the shared outlook with Vernadsky: The Economics of the Noösphere (2001,) and Earth’s Next Fifty Years (2005), and also, many articles.

To open the symposium, a video clip was shown of LaRouche addressing a seminar of scientists and economists in Germany on May 4, 2001, on the idea of the noösphere, and deliberate, interventionist development of the Earth. LaRouche spoke of “corridors of development” to span Eurasia, which he stressed are not to be thought of as “railroad” or even “Silk Road” corridors. They are much more, and building them across “Central and North Asia” should be seen as one of the “greatest opportunities for development” yet seen in the history of man, and could be done over the next 25 years. He spoke of deploying the “science of water management, the science of reforestation … the science of atmosphere and weather.” We should be “changing the biosphere of Central and North Asia.”

Helga Zepp-LaRouche, his co-thinker, and founder and leader of the Schiller Institute made the observation during the discussion period, that it is “remarkable, 20 years later, the continent is integrating” and developing in exactly the way that Vernadsky and LaRouche discussed. Zepp-LaRouche reported on the momentum for development underway by the Belt and Road Initiative, the BRICS, the Shanghai Cooperation Organization (SCO), the Eurasian Economic Union (EAEU) and concrete projects changing the economic space of Eurasia. She asked, should our time now be called, the “noö-stage of civilization” or maybe the time of “noö-society?”

The biography and influence of Vernadsky was given as the opening presentation, “Vernadsky’s Promethean Concept of Scientific Thought as a Geological Force,” on the first panel by Bill Jones, political historian and EIR correspondent. The other speakers and their topics: Dr. Vladimir Voelikov, Doctor of Biological Sciences, M.V. Lomonosov, Moscow State University—“Vernadsky’s Concept of Living Substance, with Emphasis on the Fundamental Role of Water in its Existence and Development”; Prof. Sergey Pulinets, Principal Research Scientist, Space Research Institute, Russian Academy of Sciences, Moscow—“A Journey Through Vernadsky’s Universe”; Prof. Aberto Prestininzi, Professor, Sapienza University, Rome, and Director of the Center for Earthquake Research and Information (CERI)—“Climate Change and the Galaxy”; Jason Ross, Executive Director, The LaRouche Organization—“Vernadsky’s Economic Space and Time: The Anti-Entropy of the noösphere”; Prof. Nicola Scafetta, University of Napoli Federico Due, and he’s also an adjunct professor at Duke University.

The nature and management of water were featured in the presentations of the second panel, moderated by Rachel Brown of the Schiller Institute, with an exciting focus on Africa, provided by three of the five speakers, who addressed the Nile River Basin, the Congo and Chad Basins, and South Africa.

Dr. Farouk el-Baz, speaking on “Egypt’s Development Corridor” showed how “new” economic space—with level land, water, rail, and other necessities—can be created in a corridor running just westward of the course of the Nile River, to accommodate millions of Egyptians to move away from the Nile, where they are currently “on top of each other!” The Egyptian population is 104 million and growing. Moreover, this corridor concept can be run from Egypt all the way southward into South Africa, which route el-Baz showed on a map.

Dr. el-Baz, a space geologist, has advised successive Egyptian governments. He is Research Professor and Director of the Center for Remote Sensing, Boston University, Boston, Massachusetts and Adjunct Professor of Geology at the Faculty of Science, Ain Shams University, Cairo, Egypt. He was a leading geologist in the NASA Moon project.

Engineer Andrea Mangano’s topic was, “The Transaqua Project,” referring to the program to move a portion of the flow from the Congo River Basin to revive the Chad Basin, and build related power, transportation and other infrastructure for elevating the entire productive platform. Mangano showed other depleted run-off basins, where manmade intervention would succeed to literally create new “natural” resources. Mangano is a veteran of the Bonifica, the Italian engineering team from the 1970s, which first developed the original Transaqua concept for Central Africa.

An illustrated update on prospects for harnessing fusion power, including a report on the international ITER project in France, was given by Michal Paluszek, President of the Princeton Satellite Systems, Plainsboro, N.J. His topic was, “Latest Developments in Nuclear Fusion.”

The final speaker was Prof. Gerald Pollack, on “The Fourth Phase of Water, and Life.” He is Professor of Bioengineering, University of Washington, Seattle, and founder of the Annual Conference on the Physics, Chemistry, and Biology of Water.

One obvious significance of this Vernadsky symposium is that it happens to have occurred just at the time of the COP27 conference in Sharm el-Sheikh, Egypt, and the contents of the Schiller Institute panels refute all the anti-development, so-called science and economics premises of the UN Conference on Climate Conference (formed in 1992, now having its 27 meeting), namely that CO₂ emissions are causing an emergency, and shifting to low grade energy and reducing population are desirable.

As Dennis Speed said at the beginning, regarding the ideas of both Vernadsky and LaRouche, they had an “anti-Malthusian conception, not a limits to growth construct.”

Two of the speakers at the Schiller Conference are part of a group of Italian scientists who recently released a book, Dialogue on Climate (in Italian), based on an excellent series of briefings they held over the past year, to refute the anti-growth science frauds about global warming.

Another, profound dimension of the importance of the Vernadsky symposium is that the proposals and initiatives presented add to the momentum of institutions in motion for a new world architecture of development. Many speakers commented on this. Jason Ross put it, “Anti-entropy growth is our mission.” Professor Pulinets stated matter of factly, that this symposium must be the beginning of more meetings of scientists and economists, to get things done.

Helga Zepp-LaRouche, in her remarks about the symposium, made the point that the “cultural optimism which comes from the work of Vernadsky and LaRouche” is proof that “the Malthusians are wrong.” We can look forward to the work of making the future bright.

The full conference is video-archived here, and EIR News Service will be running selected presentations in upcoming issues of EIR. 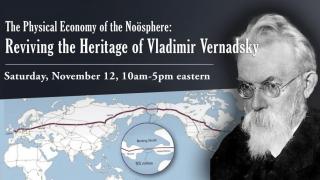