Zepp-LaRouche Urges Non-Aligned: You Have the Power To Prevent Nuclear War; Use It

Leading Developments
Zepp-LaRouche Urges Non-Aligned: You Have the Power To Prevent Nuclear War; Use It PDF

Representing over 6.5 billion of the world’s 8 billion people, between its member and observer states, it clearly represents the majority of the world. Furthermore, the history of the movement gives it the authority to intervene globally now. The Non-Aligned was founded in 1955 in Bandung, Indonesia, by leading nations of Africa and Asia determined to end colonialism and being forced into blocs, and that is still the issue today, she said. In her address, and in an article published in a book produced for the conference, Zepp-LaRouche emphasized that the conflict in the world is not between so-called democracies and so-called autocracies; it is “a fight between those forces in the world who want to keep the colonial order”—the neoliberal financial system which is in its final phase of collapse now—“and those countries, especially of the Global South, that want to fight now for the Good, for their right for economic development.”

Since that conflict is the driver for global, possibly nuclear war, the best option would be for a group of Non-Aligned nations to go together to the G20 meeting in Indonesia next week “and put on the table the need to have an immediate reorganization of the world financial system which is bankrupt,” she proposed. And if the G20 meeting fails to take that up, then “the Non-Aligned Movement must find a soon-to-be-created opportunity to put this on the agenda: Call for a new emergency UN General Assembly, but take action. … you have to raise your voice, because we have an incredible danger right now to all civilization.”

The conference was an ideal place to launch this initiative. The weeklong conference was organized as a commemoration of the history of the Non-Aligned Movement’s international struggle for global peace, justice and prosperity from the standpoint of what dreams, 66 years after the Bandung Conference, are still dreams, what challenges are to be taken up, what projects should be proposed to make the dreams a reality. Running from Nov. 7-13, it ends in Bali, two days before the G20 summit convenes on that island.

The speeches of the participants expressed the revolutionary mood that is spreading across the Global South. Most participants discussed the clear signs of the demise of the imperial “rules-based order” and the need to build a just new world economic system. How and when to build a system challenging the Anglo-American domination of world banking, in order to protect nations from speculation attacks, as well as unlawful seizure of sovereign assets, and to allow the technological development and independence of all nations, was a hot topic.

Some argued that the developing sector should forget the West, and proceed on its own to build a non-dollar system. Zepp-LaRouche intervened. She insisted: the seeds of war will grow in any system based on blocs, which does not include all the nations of the world. The Non-Aligned Movement has no choice but to help organize Western nations to drop geopolitics and understand that their interests, their economic development, too, can only be secured in a new international architecture organized around fostering physical economic development of all.

Enter India, a founding member of the Non-Aligned Movement. On Thursday, Nov. 10, its Defense Minister Rajnath Singh delivered an extraordinary speech at India’s National Defense College, outlining the principles upon which “a global order which is beneficial to all of us” must be founded, if the grave security threats facing the world are to be countered.

The principles he outlined for what he called a “framework of strategic morality,” are the antithesis of geopolitics. Singh cited Martin Luther King, Jr.’s, statement that “injustice anywhere is a threat to justice everywhere,” and Mahatma Gandhi’s famous proclamation, when organizing India’s liberation from the British Empire, that he did not want freedom for his country “in order to exploit any other race upon Earth, or any single individual.” A strong and prosperous India, he proclaimed, “would not be built at the cost of others; rather, India is here to help other nations realize their full potential.”

That is the principle of the Treaty of Westphalia upon which European nation-states were founded! Restated in India’s way, by Defense Minister Singh. Will you listen now, citizens and leaders of the West? Asia is reminding you of your own history! India, which vies with China for the most populous nation on Earth, which Western geopoliticians and media hold up as a “democratic” model compared to those evil demons, Russia and China, is offering you the “off-ramp” from war and economic destruction.

In this very complex and dangerous world situation, it is notable that India now chairs the Shanghai Cooperation Organization (after its September 15-16 summit), assumes the presidency of the G20 after its Nov. 15-16 summit in Indonesia, and will chair the UN Security Council in December 2022.

Zepp-LaRouche explained the power of this movement, in concluding her article for the Bandung Spirit conference:

“If a way can be found to remind the United States and the European nations of their better traditions, of the policies of Benjamin Franklin or John Quincy Adams, of Enrico Mattei, Charles de Gaulle or the German-Indian cooperation in the building of the Rourkela steel plant, a new paradigm of worldwide cooperation based on the Pancheel, the five principles of peaceful coexistence, can be established.” After all, as Indonesian President Sukarno recalled in his speech to the 1955 Bandung Conference, the “first successful anti-colonial war in history” was the American War of Independence. 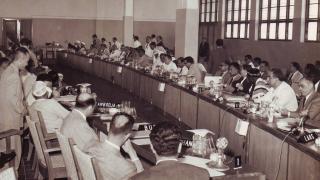