Nov. 4 -- In the midst of heightened tensions between Russia and NATO over Ukraine, worsened by the repetition of fraudulent charges that President Putin is threatening to use nuclear weapons against Ukraine, the Foreign Ministry of the Russian Federation published a sharp statement on November 2, reiterating its commitment to the “tenet that a nuclear war cannot be won and must never be fought.”  It states, unequivocally,

“We fully reaffirm our commitment to the Joint statement of the leaders of the five nuclear-weapon states on preventing nuclear war and avoiding arms races of January 3, 2022.  We are strongly convinced that in the current complicated and turbulent situation, caused by irresponsible and impudent actions aimed at undermining our national security, the most immediate task is to avoid any military clash of nuclear powers.”

“We urge other states of the ‘nuclear five’ to demonstrate in practice their willingness to work on solving this top priority task [to 'avoid any military clash of nuclear powers'] and to give up the dangerous attempts to infringe on vital interests of each other while balancing on the brink of a direct armed conflict and encouraging provocations with weapons of mass destruction, which can lead to catastrophic consequences.”

The statement against the use of nuclear weapons is a reaffirmation of one released following a summit between U.S. President Ronald Reagan and Soviet leader Mikhail Gorbachev in Geneva on November 19-20, 1985, when the two agreed to re-engage in arms control talks.

As of the time of the writing of this article, there has been no public response to the Russian appeal from the United States, the United Kingdom and France, which are three of the ""Nuclear Five" which agreed to the release of the joint statement at the beginning of this year, and which have been engaged in the belligerent campaign against Russia, using Ukraine as a battering ram.

The renewed commitment by Russia of its opposition to use nuclear weapons is part of a pointed diplomatic offensive, which included the summoning of the British Ambassador to Russia, Deborah Bronnert, to the Ministry of Foreign Affairs, where she was presented with evidence of the British role in the October 29 drone and missile attack on Russia’s Black Sea fleet in Sevastopol.  Prior to the meeting, the official response from the UK government to the Russian charges was to accuse them of "peddling false claims of an epic scale," while British media, typified by {The Express}, characterized the Russian charges as "unfounded allegations. (1)

After the session, the Russian Ministry released a statement identifying the place, date, time, and military units involved in British training and collaboration with Ukraine’s marine special forces in recent operations, and in some going back to 2020.  The Ministry reported that the Ambassador was presented with a "severe demarche", which "stressed that such confrontational actions by the British threatened to escalate the situation and could lead to unpredictable and dangerous consequences.”

While this Russian statement did not include specifics of evidence gathered of Britain’s involvement in the September 26 attack on the North Stream pipelines, Nikolai Patrushev, the Director of Russia’s National Security Council, reiterated today that Britain was involved in that attack, and that evidence was presented in a closed-door session of the U.N. Security Council.

There has not yet been an official response from the UK government following the issuance of the demarche, though new Prime Minister Sunak emphasized his government's commitment to continue its "full support" of NATO efforts in Ukraine.

At such a moment, when one might expect sanity would dictate that the Anglo-American-led forces accept Putin's call for a negotiated end to the war, there is instead an all-out clamour in the U.S. media of unhinged war hawks calling for World War III!  Most prominent is an article published on October 27 in {Foreign Affairs}, the journal of the Council on Foreign Relations, "Could America Win a New World War?  What It Would Take to Defeat Both China and Russia." This article decries the decision in 2015 to abandon the long-standing strategy of being prepared to fight two wars simultaneously -- against great powers Russia and China -- and instead to concentrate preparation to defeat just one. (2)

That decision, according to author Thomas Mahnken, has led to a weakening of U.S. military capabilities, which must now be reversed by a major military buildup, to enable the U.S. to fight wars in eastern Europe versus Russia, and in the Pacific, against an "aggressive" China.  To meet the "challenge" from China, he argues that U.S. military manufacturing must be significantly upgraded, to produce more powerful naval capabilities, including new aircraft carriers, and better aircraft to be deployed on them. (3.)

On the same day this article appeared, the Biden administration released the 2022 National Defense Strategy document, which presents the case for what it calls "Integrated Deterrence".  This is defined as the "means for using every tool at the [Defense] Department's disposal, in close collaboration with our counterparts across the U.S. Government and with allies and partners, to ensure that potential foes understand the folly of aggression."  Singled out as such foes are Russia, identified as a "reckless", "irresponsible" and an "acute threat"; and China, defined by Defense Secretary Austin in the report's introduction as "our most consequential strategic competitor for the coming decades", representing the "pacing challenge" for the U.S. military.

He concludes by stating that "Integrated Deterrence" is the basis to "gain and sustain military advantages, counter acute forms of our competitor's coercion, and complicate our competitors' military preparations."

Included in the report for the first time are the Nuclear Posture Review (NPR) and the Missile Defense Review, in an "integrated way, ensuring tight linkages between our strategy and our resources."  This will enable the U.S., Austin writes, "to collaborate with our NATO allies and partners to reinforce robust deterrence in the face of Russian aggression" and threats from China, as well as from North Korea and Iran.

Including the NPR is of particular note, as it presents a change in U.S. policy regarding the first use of nuclear weapons.  According to nuclear disarmament expert Scott Ritter, the language in the report leaves the issue of when the United States might use nuclear weapons deliberately ambiguous, including the possibility that the U.S. might launch a preemptive nuclear attack in response to a non-nuclear incident -- thus significantly lowering the threshold for nuclear war.  Ritter called this a policy of "nuclear blackmail."  Schiller Institute chairwoman Helga Zepp LaRouche described this specific shift in U.S. policy, which began under the George W. Bush administration but is more explicit in this report, as a sign of insanity, as it represents the commitment to engage in permanent warfare in defense of the collapsing Unipolar Order, up to and including the use of nuclear weapons.

The initiatives taken by the Russian Foreign Ministry to counter the typical perfidious role of the British in running dangerous geopolitical provocations must be backed by a rallying of citizens of all nations behind a strategy for peace.  This has been taken up by the Schiller Institute, whose chairwoman Helga Zepp-LaRouche has called for a mobilization of citizens of all nations based on a commitment for a new strategic and financial architecture to counter the neocon/neoliberal drive for war.

Following two conferences, which heard from present and former elected officials speaking on behalf of breaking out from under the Unipolar Order, a declaration was drafted, which is circulating to build the next conference, on November 22.  The declaration calls on

"people of good will around the world -- notwithstanding our diverse and natural differences -- to participate in this process of deliberation and search for peaceful solutions, including a thorough examination of the alternative economic policies to replace speculation, which has generated so much suffering, with a system of production and progress to meet the needs of a growing world population."

Registration for this upcoming conference can be done at this link:

1.) If any nation could be accused of "peddling false claims" it would be the British, who have repeatedly fabricated "intelligence" to justice regime change and wars, as in MI6's production of the "dodgy dossier" on Iraq's possession of Weapons of Mass Destruction to justify the invasion and destruction of Iraq, including mass murder of civilians; fake reports on Qaddafi's plans to murder Libyan civilians, which led to the U.S.-NATO destruction of that nation and murder of civilians, as well as of Qadaffi; and the fake dossiers alleging use of chemical weapons by the Assad government, just to name a few!

3.) In addition to the {Foreign Affairs} article is a plethora of diatribes from war hawks in the media and think tanks.  A sampling of titles compiled by columnist Caitlin Johnstone includes Josh Rogin in the Washington Post, “The Skeptics Are Wrong: The U.S. Can Confront Both China and Russia”; Bloomberg’s Hal Brand, “Can the U.S. Take on China, Iran and Russia All at Once?”; The Atlantic Council’s Matthew Kroenig, “International Relations Theory Suggests Great-Power War Is Coming”; the New Yorker, “What If We’re Already Fighting the Third World War with Russia?”; and “Could the U.S. Military Fight Russia and China at the Same Time?” by Robert Farley. 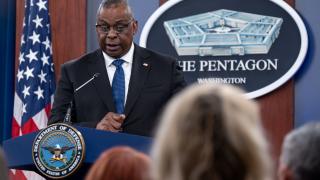