Thursday’s Executive Intelligence Review-sponsored event, “We Will Not Be Silenced: Speaking Truth In Times of War'' allowed  courageous journalists, present and former intelligence officers, political candidates and others that have been “marked for death” by a NATO-directed pogrom against the truth, to not only speak out, but to be given a platform to work together to defeat the imminent danger of thermonuclear war, whether by miscalculation or design.

Yesterday, Oct. 7, the Schiller Institute presented “Stop The War Before It Is Too Late; Eliminate The Causes Of The War Danger” featuring speakers from the nations of Mexico, Guyana, Columbia, Trinidad and Tobago, Germany and the United States in a first-of-its-type dialogue.

Today’s Manhattan Project meeting will not only discuss those conferences and their strategic context, but will preview an hybrid (virtual and live) conference to be held next Saturday, October 15, “Build The New Paradigm—Defeat Green Fascism” which all should attend and organize for. 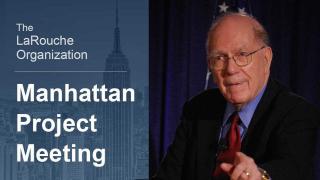