The notorious Center for Countering Disinformation (CCD), operating under Ukrainian President Volodymyr Zelenskyy’s National Security and Defense Council, today posted on its website an expanded version of its hitlist against “Speakers Who Promote Narratives Consonant with Russian Propaganda.” The CCD first published a hitlist on July 14, 2022, as the first shot in its campaign to get anyone deviating from the NATO narrative about the Ukraine-Russia conflict declared an “information terrorist” and tried as a “war criminal”—or to be killed by Nazi hit squads. At least five of those fingered in the CCD’s first list were also found to be included in the fascist “Myrotvorets” list of enemies to be “liquidated,” two of them (Schiller Institute founder Helga Zepp-LaRouche and Schiller Institute spokesman Harley Schlanger) explicitly on the basis of their having been singled out on the CCD hitlist.

Number one on the CCD’s new list is Schiller Institute founder Helga Zepp-LaRouche. This list now numbers 95 people, including a head of state: Yoweri Museveni, President of Uganda! At least 15 of those added are journalists of many nationalities—including Fox News’s Tucker Carlson. U.S. Sen. Rand Paul and former Rep. Tulsi Gabbard are still fingered by the CCD, as are U.S. Senate candidate Diane Sare, House of Representatives candidate Geoff Young, Bundestag member Rolf Mützenich, six Members of the European Parliament, and the dozens of other prominent personalities who had spoken at various Schiller Institute conferences.

Under international fire, the CCD had removed the first, July 14 version of its list from its website on August 11. EIR warned, however, that the operation continued, and that being named on the CCD list poses a grave threat to the personal security of those named. On Sept. 2, EIR warned in its article, “Global NATO Orders a Hit on Advocates of Peace,” and accompanying “Ukraine’s Deathlist Database: myrotvorets.center,” that “rapid, decisive international action is required to force the closure of the Center for Countering Disinformation,” providing extensive documentation that the CCD functions as a proxy for NATO, having been created and financed by the U.S. and U.K. governments, the NATO alliance, and the European Union, which continue to advise it in every step it takes.

With the support of the Schiller Institute, EIR sponsored a Sept. 7 press conference addressed by many of those named on the first CCD list, joined by others fingered on the Myrotvorets list. These activities put an international spotlight on the CCD’s intolerable threats.

The CCD spent the month of September organizing for NATO alliance countries and their partners to enact laws to silence those named on its list, starting with its Sept. 1-2 international roundtable on “Combating Disinformation in the Conditions of Military Operations,” attended by representatives of 24 countries, including “senior experts” from NATO’s Strategic Communications Center of Excellence. Then, with the support of NATO StratCom, CCD Acting Director Andriy Shapovalov held meetings and gave speeches in several capitals of Europe, demanding that legislation be enacted making “information terrorism” an official crime.

Now, the CCD has re-posted and expanded its hitlist.

For those who may have believed, wishfully, that the CCD/Myrotvorets proposed policies, threats, and outright murders were so outlandish that they would just go away on their own, must now face the fact that they were wrong. It is clear that shutting this operation down requires that all those targeted, and anyone seeking a serious policy debate on how to stop the deadly war, raise their voices together against this monstrous operation. 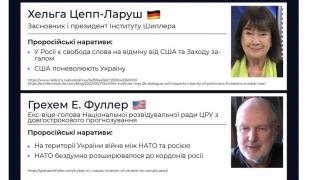