Over the last two weeks at the UN General Assembly debate, 66 nations resisted the geopolitical push into isolating Russia. Instead they chose to use their addresses to the assembly debate to call for diplomacy and peace. Medea Benjamin of CODEPINK provided selections from the addresses of all the presentations. The nations were mainly from the Global South, as has been covered by this news service before, but it also included five European countries—Hungary, Malta, Portugal, San Marino and the Vatican.

To summarize a few notable ones:

Macky Sall, the president of Senegal and current chairman of the African Union, said: “We call for de-escalation and a cessation of hostilities in Ukraine, as well as for a negotiated solution, to avoid the catastrophic risk of a potentially global conflict.”

Vatican Secretary of State Cardinal Pietro Parolin, said, “the war in Ukraine not only undermines the nuclear non-proliferation regime, but also presents us with the danger of nuclear devastation, either through escalation or accident…. To avoid a nuclear disaster, it is vital that there be serious engagement to find a peaceful outcome to the conflict.”

President José Ramos-Horta of Timor-Leste: The West “should pause for a moment to reflect on the glaring contrast in their response to the wars elsewhere where women and children have died by the thousands from wars and starvation. The response to our beloved Secretary-General’s cries for help in these situations have not met with equal compassion. As countries in the Global South, we see double standards. Our public opinion does not see the Ukraine war the same way it is seen in the North.”

Republic of Congo (Brazzaville) Foreign Minister Jean-Claude Gakosso: “Because of the considerable risk of a nuclear disaster for the entire planet, not only those involved in this conflict but also those foreign powers who could influence events by calming them down, should all temper their zeal…. The world urgently needs these negotiations … to prevent them from going even further and pushing humanity into what could be an irredeemable cataclysm, a widespread nuclear war beyond the control of the great powers themselves—the war, about which Einstein, the great atomic theorist, said that it would be the last battle that humans would fight on Earth.” [emphasis added]

Notably, Gakosso then changed from spfeaking in French to speaking in Russian, saying he wanted to directly address his Russian and Ukrainian friends: “Too much blood has been spilled—the sacred blood of your sweet children. It’s time to stop this mass destruction. It’s time to stop this war. The entire world is watching you. It’s time to fight for life, the same way that you courageously and selflessly fought together against the Nazis during World War II, in particular in Leningrad, Stalingrad, Kursk and Berlin. Think about the youth of your two countries. Think about the fate of your future generations. The time has come to fight for peace, to fight for them. Please give peace a real chance, today, before it is too late for us all. I humbly ask this of you.” 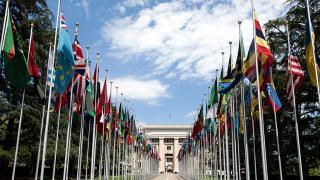