In 2001, Lyndon LaRouche conducted a dialogue with Russian intelligentsia, including economists Sergei Glaziev and the late Stanislav M. Menshikov. They were the authors of two books—Genocide: Russia and the New World Order, and The Anatomy of Russian  Capitalism. Both were published by Executive Intelligence Review.

In that dialogue, LaRouche spoke “Of a system of long-term credit, issued by those nations which are producing the greater part of the technology, production, to the nations which need that supplement in order to get out of the mess they’re in. So this means a system of long-term credit, this means interest rates in the order of one percent per annum, no compound interest, long-term agreements under which the great markets, called Need, in South Asia, Southeast Asia, East Asia, now coming into a partnership with Europe , with Russia, with Japan and so forth, in order to create a great economic boom with some of the same features that were used used to rebuild Western Europe in the immediate postwar period, through the various Marshall Plan and other programs, through the Kreditanstalt für Wiederaufbau in Germany, for example. That kind of program for a generation of recovery, a generation of progress, a generation of development. “

Then LaRouche added something a revolutionary idea:

“In order to make this work, as has been understood for more than a century, almost a century and a half, the only way this could work, was to develop a system of infrastructural development which would effectively link the Atlantic Ocean to the Pacific Ocean across Eurasia. This is not railroads, this is not Silk Roads; these are corridors of development, which run a range of, let’s say, up to 100 kilometers in width, from the Atlantic to the Pacific, going in various directions. Along these routes, as we did in the United States with the Transcontinental Railroad, the area on either side of the transportation axis becomes immediately, in and of itself, a sustainable area of economic development. By that means, you can branch out from the main corridors into subsidiary corridors of development and capture the area.”

Gerry Rose joined us this week to discuss. 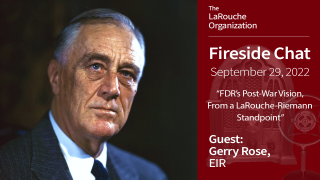 Are There Signs of Sanity Among NATO Countries Leaders?