Will a Coincidence of Opposites Help Reshape Washington?

Twenty years ago, anti-war ferment in the United States in the run-up to the illegal and devastating invasion of Iraq found a far greater reception in Democratic Party networks than Republican ones.

That is not the case today.

Two weeks ago, during the September 11 Week of Action called for by CODEPINK and the Peace in Ukraine Coalition, activists went door to door to offices of the House Congressional Progressive Caucus. Although some of the members of Congress spoke to the need for diplomacy, none committed to voting against more weapons for Ukraine.

In an interview with the GrayZone, CODEPINK leader Medea Benjamin spoke to the poor response she received. For example, Congresswoman Barbara Lee's staff said they supported negotiation, but did not understand Benjamin's point that an unceasing flow of weapons torpedoes the potential for negotiations. The office said that preventing Russian colonialism was a powerful goal.

Asked whether it was possible to work with America First Republicans on this issue, Medea Benjamin responded that she did not feel comfortable being in a coalition with such people, and wanted only to build a coalition among people who agree with her on such issues as, for example, the "climate crisis."

When the world faces an apocalyptic situation, does it make sense to insist on building an anti-war alliance — and fostering discussion — only among people who are broadly in agreement on other issues?

Will histrionics about Donald "Hitler" Trump be sufficient to prevent anti-war people on the left from breaking from their subservience to "progressive" Democrats? How influential are demands from voters who will (reluctantly, perhaps, but reliably) continue to vote for those who do not respond to them?

The recent trending of #MAGACommunism among younger people online reflects the potential for a true coincidence of opposites approach, in which dialogue on important issues can proceed even in a climate of significant disagreement on many particulars.

Will CODEPINK visit Republican offices next time it visits Congress?

The LaRouche Organization's new webpage on defeating the Goebbels assault on free speech about the potentially civilization-ending Ukraine crisis includes a sample letter to Congress that you can use to help foster a discussion with your representative -- no matter the party. 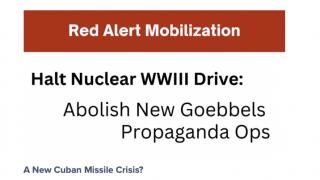