Aug. 16—In his opening address to the Tenth Moscow Conference on International Security, Russian President Vladimir Putin declared the end of the unipolar world order led by the US and its replacement by a multipolar order based on international law and just relations among nations. “The situation in the world is changing dynamically and the outlines of a multipolar world order are taking shape,” Putin said, reported the Kremlin transcript. “An increasing number of countries and peoples are choosing a path of free and sovereign development based on their own distinct identity, traditions and values.”

“These objective processes are being opposed by the Western globalist elites, who provoke chaos, fanning long-standing and new conflicts and pursuing the so-called containment policy, which in fact amounts to the subversion of any alternative, sovereign development options,” Putin continued. “Thus, they are doing all they can to keep hold onto the hegemony and power that are slipping from their hands; they are attempting to retain countries and peoples in the grip of what is essentially a neocolonial order. Their hegemony means stagnation for the rest of the world and for the entire civilization; it means obscurantism, cancellation of culture, and neoliberal totalitarianism.”

“The United States and its vassals grossly interfere in the internal affairs of sovereign states by staging provocations, organizing coups, or inciting civil wars,” Putin went on. “By threats, blackmail, and pressure, they are trying to force independent states to submit to their will and follow rules that are alien to them. This is being done with just one aim in view, which is to preserve their domination, the centuries-old model that enables them to sponge on everything in the world. But a model of this sort can only be retained by force.”

“The situation in Ukraine demonstrates that the US is trying to prolong this conflict,” Putin said, stessing that Moscow launched its military operation in Ukraine in late February in order to “ensure the security of Russia and its citizens, and defend the people of Donbass from genocide.” He added that the US has “set the role of cannon fodder for Ukrainians, implemented the ‘anti-Russia’ project [in Ukraine], turned a blind eye to the spread of neo-Nazi ideology, to the mass murder of the people of Donbass,” adding that the US has been “pumping the Kiev regime with weapons, including heavy weapons, and continues to do so.”

Further, the U.S. is similarly provoking conflicts in Asia, Africa, and Ibero-America in the same way. “The US escapade towards Taiwan is not just a voyage by an irresponsible politician, but part of the purpose-oriented and deliberate US strategy designed to destabilize the situation and sow chaos in the region and the world. It is a brazen demonstration of disrespect for other countries and their own international commitments. We regard this as a thoroughly planned provocation.”

“It is clear that by taking these actions, the Western globalist elites are attempting, among other things, to divert the attention of their own citizens from pressing socio-economic problems, such as plummeting living standards, unemployment, poverty, and deindustrialisation,” Putin continued. “They want to shift the blame for their own failures to other countries, namely Russia and China, which are defending their point of view and designing a sovereign development policy without submitting to the diktat of the supranational elites.”

Putin stressed that the multipolar world that’s coming into being, “based on international law and more just relations, opens up new opportunities for counteracting common threats, such as regional conflicts and the proliferation of weapons of mass destruction, terrorism and cybercrime. All these challenges are global, and therefore it would be impossible to overcome them without combining the efforts and potentials of all states.” 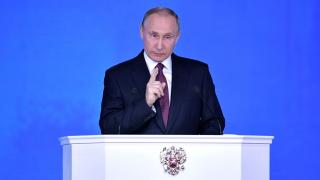