Defend Your Right To Deliberate, If You Want To Stop World War

Aug. 9—“Global NATO” is bearing down on its drive to control “the narrative” around the globe. No opinion which is not the official “narrative” is allowed anymore; action is being threatened against those who would violate these orders. These are pre-war measures, Schiller Institute founder Helga Zepp-LaRouche warned today. They must be defeated.

Review the following elements of the world picture:

The Center for Countering Disinformation of Ukraine, set up and directed by NATO, the U.S., the European Union, and the UK, insists that more than 70 prominent scholars, military officers, political leaders and journalists from many countries around the world be tried as “war criminals,” “Russian propagandists.” Their crime? Proposing dialogue and a peaceful resolution of the Ukraine-Russia war. Yet no protest has been raised by any Western government, to date. Russia is “our enemy,” and no one is allowed to say otherwise.

Then, Speaker of the House Nancy Pelosi flies into Taiwan, in a blatant act of provocation which unleashed its intended result: preparations for U.S.-China conflict. The ruling elites of the United States and Europe are ramping up the anti-China propaganda, while issuing studies and draft legislation for the “decoupling” of Western economies from China. Decoupling from Russia has brought economic chaos to many parts of the world, Europe emphatically included, but today’s chaos and austerity will look like a picnic compared to the results of decoupling from China. It is an insane policy, but China is “our enemy,” we are told.

U.S. State Department and British Foreign Office officials continue to crisscross the globe, instructing nations that Russia and China are threats to “the international system,” and all nations have to stand together against them. Secretary of State Tony Blinken, currently on a three-nation tour of Africa to deliver this message, had the audacity on Monday to tell his South African hosts with a pious face, that African nations have to join in breaking with Russia and China, because they cannot “allow a big country to bully a smaller one, to simply invade it and take its territory.”

Now the FBI has carried out an unprecedented raid on the home of a former U.S. President, ransacking his papers and his safe. What is Donald Trump’s crime which provoked this action? That he might run for President in 2024, and “could win!” Four days before, London’s The Guardian published an urgent call for the Department of Justice to indict and convict Trump quickly. “The goal must be to secure a conviction before November 2024, and in any event, no later than 20 January 2025, when the next presidential term begins.”

This is not an issue of Donald Trump. This is a message to Americans that our right to choose our candidates and participate in an open electoral debate is considered an obstacle to Global NATO’s intent to establish itself as a world government, through global war. It is the same as the Ukrainian blacklist; no different opinions, no deliberation, no search for truth is allowed.

The creation of this “fascism with a democratic face” began with the indictment, media witch hunt, conviction and jailing of American statesman Lyndon LaRouche in the 1980’s. LaRouche was not intimidated, but fought for the right of Americans to have opinions and deliberate. At the extraordinary two-day tribunal held with leaders of the U.S. civil rights movement and others in August 1995 on his case and many others, Mr. LaRouche warned that there could be no justice and democracy in the United States, until the rot in the permanent bureaucracy was cleaned out:

“We have an out-of-control Justice Department, in my view, where the rot is not in the appointees, as much as it is in the permanent bureaucracy. We have a permanent sickness, in the permanent bureaucracy of part of our government…. Always there’s that agency inside the Justice Department, which works for a contract, like a hitman, when somebody with the right credentials and passwords walks in, and says, ‘we want to get this group of people,’ or ‘we want to get this person.’…. Until we remove, from our system of government, the rotten, permanent bureaucracy which acts like contract assassins, using the authority of the justice system to perpetrate assassination, this country is not free, nor anyone in it.”

That is the apparatus now being deployed against all Americans, which Trump failed to clean out. The single most effective measure he could have taken as President to remedy this evil would have been to exonerate Lyndon LaRouche (instead of pardoning Steve Bannon), in order to open the floodgates to both dismantling the fascist permanent bureaucracy in the Department of Justice and elsewhere in the government, and most importantly to foster deliberation around LaRouche programmatic policy alternatives to the current descent into Malthusian genocide and world war.

Now is the time to use the “LaRouche card” to bust up the drive for war! The Wall Street and London financial Establishment have launched their hounds of war against Helga Zepp-LaRouche, the Schiller Institute, LaRouche Party candidate Diane Sare, all those who joined us in deliberating on these matters at Schiller Institute conferences, and any independent voices whatsoever, because they fear more than anything the power of reason, of deliberation, which Lyndon LaRouche unleashed with his work around the world. 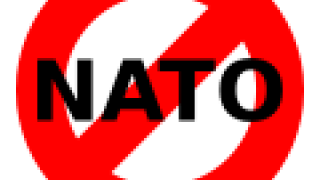 ‘Fool Me Once, Shame on You. Fool Me Twice, Shame On Me’

Dec. 1—It was only two weeks ago when President Biden finally refused to take the final leap with Ukrainian President Zelenskyy’s nuclear gamble. Zelenskyy had sworn with absolute certainty that Russia had fired missiles at NATO member Poland. The West had not let the facts get in the way of previous outrageous provocations, but this was NATO vs. Russia in direct military confrontation, two bodies with large nuclear weapon arsenals. But Zelenskyy’s bluff was called, he was exposed, and the West had the opportunity to take a clear look at what their little Frankenstein’s monster had become.