Aug. 5—In a speech Aug. 4 to a political youth summer camp in Norway, NATO Secretary General Jens Stoltenberg extolled the virtues of NATO, especially now with Russia’s military operation in Ukraine. “President Putin has attacked an entire innocent country and people, with military force, to achieve his political goals,” he claimed. “What he is really doing is challenging the world order we believe in where all countries, large and small, can choose their own path. He does not accept the sovereignty of other countries.” The war, Stoltenberg lied, “was triggered by his demand for Russian control over Ukraine.”

In this war, NATO has two tasks, Stoltenberg continued. These are, to support Ukraine, and to keep the war from spreading into a NATO-Russia conflict. “At the NATO summit in Madrid just over a month ago, all NATO countries agreed that we will support them [Ukraine] as long as necessary,” he said. “We have a moral responsibility to support them. They are an independent country, with over 40 million people, who are unjustifiably subject to a brutal war of aggression.”

“But, it is also in our own interest that President Putin does not succeed in his ambitions in Ukraine,” he continued. “A world where the lesson for Putin is, that he gets what he wants by using military force, is also a more dangerous world for us.”

At the Kremlin, Presidential spokesman Dmitry Peskov replied to Stoltenberg’s speech by charging that it is NATO aggressive policies that are to blame for tensions in Europe. “This situation has been brewing for several decades. It was largely provoked by the aggressive policy the North Atlantic Alliance pursued towards our country, repeatedly bringing its infrastructure in several waves closer to Russia’s borders. This created additional dangers for us and required Russia’s countermeasures,” he said. 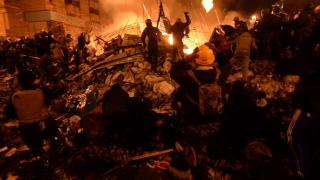