Today, Helga Zepp-LaRouche, author of the speech “Gandhi’s Vision for a New Paradigm in International Relations, a World Health System, and Direct Non-Violent Action in Times of Social Breakdown,” will offer a strategic evaluation and remarks, addressing a Schiller Institute webcast, on July 23 at 2 p.m. EDT, in response to the breakthrough against the self-destructive and immoral policy of “war by sanctions” that occurred Friday, July 22 in Istanbul, Turkey.

This breakthrough, a signed four-way agreement to finally allow shipments of grain from the Black Sea, was in part in response to the pleas, admonitions and bulletins issued by the United Nations World Food Program head David Beasley and many others. The agreement was signed by the United Nations, Turkey, Ukraine and Russia. Now that a challenge to, though not a reversal of, the murderous sanctions policy has begun in the area of world food security, that flank must be exploited to roll back sanctions against Venezuela, Afghanistan, Iran and other nations, to end the decades of Malthusian war-fighting against the developing sector in the name of “campaigning for human rights.” 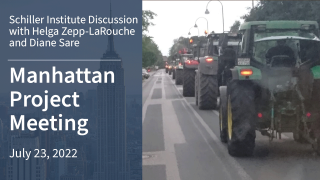