For A New Bretton Woods: Physical Economy, Not Malthusian Theft

Nor happiness, nor majesty, nor fame,
Nor peace, nor strength, nor skill in arms or arts,
Shepherd those herds whom tyranny makes tame;
Verse echoes not one beating of their hearts,
History is but the shadow of their shame,
Art veils her glass, or from the pageant starts
As to oblivion their blind millions fleet,
Staining that Heaven with obscene imagery
Of their own likeness. What are numbers knit
By force or custom? Man who man would be,
Must rule the empire of himself; in it
Must be supreme, establishing his throne
On vanquished will, quelling the anarchy
Of hopes and fears, being himself alone.
— Percy Shelley. On Political Greatness

Shelley’s admonition, that man must rule the empire of himself, is the emotional standard of our 2022 “Declaration of Independence” from war and insanity, the Ad Hoc Committee for a New Bretton Woods" petition. New signers are being sought and found. Some appear in today’s report.

Evaluation of the significance of the assassination of former Prime Minister Shinzo Abe of Japan is ongoing. The assassination of the leader of one of the world’s major Pacific powers, particularly one that had met with Russian President Vladimir Putin 27 times, in pursuit of finally signing a treaty to officially end the Second World War, must be very carefully examined. President Putin, in his statement of condolence to Abe’s family, referred to Abe as “an outstanding statesman.”

What is known, is that in the presently deteriorating international situation, the assassination of a former head of state or government can be a flashpoint of destabilization, triggering events that may not have even been the intent of the assassination. Nation magazine defense correspondent Michael Klare pointed out that “the NATO leadership found time to embrace the anti-China agenda of the Biden administration, expressed in such White House documents as the Interim National Security Strategic Guidance of March 2021, and to incorporate it into the mission statement they adopted in Madrid.” Statements spinning wild, but now “thinkable” thermonuclear war scenarios are continuing to appear in Foreign Affairs and other magazines.

In his remarks to the Russian Duma, Putin said,

“The ruling classes of the Western countries, which are supranational and globalist in nature, realized that their policies are increasingly detached from reality, common sense and the truth, and they have started resorting to openly despotic methods,” Putin noted. “The West, which once declared such principles of democracy as freedom of speech, pluralism and respect for dissenting opinions, has now degenerated into the opposite: totalitarianism. This includes censorship, media bans, and the arbitrary treatment of journalists and public figures.”

“Today we hear that they want to defeat us on the battlefield. Well, what can I say? Let them try…. But everyone should know that, by and large, we have not started anything in earnest yet.”

The Ad Hoc Committee for a New Bretton Woods, the Committee for the Coincidence of Opposites, and the Operation Ibn Sina proposals of Helga Zepp-LaRouche, emanate as conceptions of strategic diplomacy from that which Percy Shelley might have called the domain of “Prometheus Unbound.” The passionate, creative discovery and invention of unique solution-concepts that in turn generate the very cultural optimism required for their implementation, is the only way to truly “declare independence” from the culture of pessimism that, self-bound by the limits of its ideology, must needs conclude that war is the only answer. 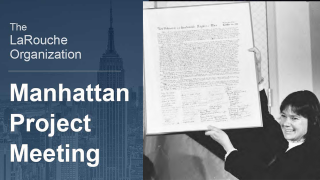