A Pathway Emerges Out of the TransAtlantic Banker's Dictatorship

Plans for more war, with wartime austerity at home and pledges for a phony "development fund" for the world, are on the agenda at the G7 meeting.  Those who met under the banner of the BRICS were not fooled by this Unipolar rhetoric.  Instead, under the banner of "Put People First", they mapped out plans for a new financial architecture focused on addressing the needs of the majority of mankind, which can be achieved by diplomacy and cooperation -- and by putting the collapsing financial system of TransAtlantic bankers into bankruptcy reorganization.  Join the Schiller Institute for an online discussion on how to do this on July 3 -- details to come. 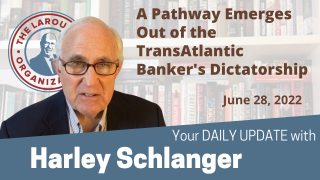