June 18-19 Conference: The Culture of Sovereignty Is the Antidote to War

The idea of self-government as expressed in the 1776 American Declaration of Independence was generalized to the whole world by Helga Zepp LaRouche in her 1984 Schiller Institute founding document, the “Declaration of the Inalienable Rights of Man.” On June 18-19, at the Schiller conference titled “There Can Be No Peace Without the Bankruptcy Reorganization of the Dying Trans-Atlantic Financial System,” international representatives will convene to propose the strategic, economic, scientific and cultural approach to building, now, a durable security and development architecture for the world.

Sanctions against nations have backfired. Hyperinflation threatens to wipe out the livelihoods of whole nations. “Limited thermonuclear war,” though insane, is seriously discussed. Financial speculation and bailouts ignore the general welfare, bankrupt governments, and spread poverty.

“We live in an era of change…Geopolitical, scientific and technological transformations are happening. The world is changing, and it is doing so rapidly. In order to claim some kind of leadership – I am not even talking about global leadership, I mean leadership in any area – any country, any people, any ethnic group should ensure their sovereignty. Because there is no in- between, no intermediate state: either a country is sovereign, or it is a colony, no matter what the colonies are called.” These words, recently spoken by Vladimir Putin in St. Petersburg, state the problem clearly.

Now, an international congress must be convened to establish among nations, not a pre-decided rule of law, but a community of principle in pursuit of a common culture of sovereignty. Participants in today’s Manhattan Project Meeting will discuss how Lyndon LaRouche’s Four Economic Laws can establish “independence through sovereignty” for all nations, and secure their inalienable right to economic growth, technological progress, and consequent durable security.

Join Harley Schlanger and Diane Sare at 2pm EDT, 11am PT for the Manhattan Project. 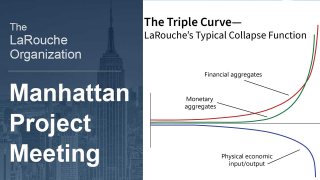