A New Security and Development Architecture: the Jubilee Year of LaRouche and Lincoln, Not Queen Liz

Clowns to the left of me, jokers to the right…”—Whether it is Robert Habeck, the Economics Minister of Germany, Mario Draghi, the banker busboy from the "Britannia" royal yacht, "Clueless Joe " Biden, Boris Johnson, Scholz, Macron, or any of the nearly interchangeable Janet Yellens, Ursula von der Leyens, Christine Lagardes, pick any member you wish of today’s “governing-managerial class" and you will find them either helplessly or intentionally worsening whatever condition they claim to be improving in every field, in every way. Particularly since September 11, 2001, government is being eliminated to pave the way for a Malthusian "great kill" known as the "Great Reset."The Feb. 4 agreement between China and Russia, however, is a specific expression of a "declaration of independence" from the planetary self-destruction now demanded by the hopelessly bankrupt monetary system that is the scepter of the financial oligarchy’s infernal power. The science of Physical Economy asserts that the discovery and invention of new physical principles through critical experiments can be successfully replicated and deployed to positively transform mankind’s productive relationship to all nature, including human nature itself. Instead of commemorating “A mad, old, diseased and dying empire,” as is occurring in the pagan ceremony unfolding in Great Britain this weekend, we choose to celebrate, not the undead, but the living ideas and centenary of the designer of the world’s new Security and development architecture, Lyndon LaRouche. 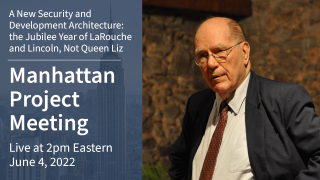