The “Higher Peace” Movement: Thinking Our Way Out of World War 3

The drive for “total war with Russia and China” on the part of “Global Britain,” also called “Global NATO” continues—but why? No array of Disinformation Governance Boards can cover up for the increasingly obvious fragility of the global international monetary system. Apart from the fact that the approximately $2 quadrillion in notional debt instruments of various kinds presently floating around in the hopelessly bankrupt world monetary system is an intrinsically unplayable sum, the ongoing global physical breakdown crisis, expressed in the threat posed by new and old pandemics to all of humanity, means that “depraved indifference” and moral neutrality is no longer a viable option for those of us that wish to survive.

Now new, perhaps even revolutionary, political processes, superseding obsolete party formations and informed by the true interests of the human race as a whole, must arise. These processes must be nonviolent, because even so-called “limited war,” as can be seen in the case of the dangerously manipulated Ukraine “proxy war” situation, can lead, almost inexorably, to the doorstep of thermonuclear annihilation. Importantly, Helga Zepp-LaRouche’s initiative, as presented in the April 9 “Conference for A New Security and Development Architecture for All Nations,” is now being echoed, albeit in partial or diluted form, by others in Italy, Germany, Australia and the United States, as well as other portions of the “Anglosphere.”

A panel, including TLO spokesman Harley Schlanger, author of the recent article “Biden Administration Adds State Censorship to Protect the Unipolar Order,” as well as organizers Anastasia Battle and Gerald Rose, will discuss the momentous international changes now underway, a moment fraught with the greatest potential, as well as the greatest danger, in all of human history. 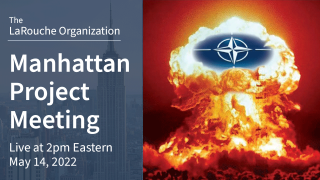