By the end of last week, two things are clear: that NATO intends to continue its war against Russia, despite growing resistance from some of its members; and that their solution to building economic crises -- inflation, pending defaults on unpayable debt, supply chain issues, infrastructure breakdown and rapidly increasing poverty -- is massive spending for military buildup.  This was especially clear from the statements by Nazi apologist, Chrystia Freeland, Canada's Deputy PM and Finance Minister, and reputed front-runner to replace NATO General  Secretary Jens Stoltenberg.

For LaRouche movement interventions against this, watch these two videos:

Interview with Nuclear Expert Steven Starr — Could We Win a Nuclear War? 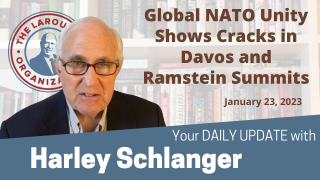