Is Arestovych pulling a 'Zelensky'?

The apostasy of Oleksiy Arestovych — who just resigned his post as advisor to Ukraine's Office of the President — in his ridiculing the Kiev regime’s insane, counterproductive assaults against its large Russian-speaking population, has raised a few eyebrows. He has certainly had a career of self-promotion. In December 2017, he came out as a self-described propagandist, bragging that he had “lied a lot” since 2014 so as to boost the morale of Ukrainians and damage the image of Russia.

This statement by Arestovych has earned him a spot on the Myrotvorets enemies list.

Marat Bashirov suggested that Arestovych’s resignation from Ukraine’s Office of the President may signal the launch of a political career, positioning himself for a time when the “war to the last Ukrainian” faction in Kiev collapses. Bashirov posted on Telegram that Zelensky’s office may find it “difficult to shut him up.” Then he added that Arestovych has patrons among the British intelligence fold.

Bashirov was the chair of the Council of Ministers of the Lugansk People’s Republic for a couple of months in 2014. Presently he is a political scientist serving as a member of Russia’s “Council of Expertise of the Federal Antimonopoly Service” and as the “Director of the Centre for the Study of Problems of International Sanctions Regimes.”

If Arestovich is cleverly positioning himself for a time when a fever is broken in Kiev, he won’t be the first. One Ukrainian politician tried this in the recent past, stating: “In the East and in Crimea—people want to speak Russian. Leave them alone… just leave them alone. Legally, provide them the right to speak Russian. Language should never divide our country… Russia and Ukraine are brotherly people—I know many millions, thousands of people who live in Russia and who are wonderful. We are one color, one blood—we understand each other, irrespective of language…” His name was Volodymyr Zelensky, and such talk secured him 73% of the vote in 2019.

The former head of the SBU’s investigative division, Vaskly Prozorov — who has many stories to tell of skullduggery and dirty operations by the Kiev regime — was interviewed on ukraina.ru regarding Arestovych’s actions. He expressed no doubt that Arestovych is capable of positioning himself, as did Zelensky, to push to become the next President of Ukraine.

Finally, one wit suggested that he heard Arestovych say, as he was departing Zelensky’s inner circle, “Armegeddon outta here.”

Regardless of Arestovych’s motive, and even if he is only having a "one-night stand" with the truth, the mere statement of some simple truths function to set into bold relief the Hitler-in-the-bunker mindset prevailing amongst a Kiev faction that has accepted their starring role in the final takedown of Russia. 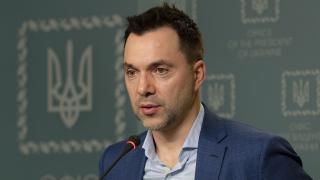