Who Will Stand Up Against the Rush into World War III?

NATO officials are engaging in nonstop meetings this week in an effort to "send a message to Putin", according to UK Foreign Secretary Cleverly, that they will "support Ukrainians until they are victorious" -- or, as opponents of the war have stated, the War Hawks are prepared "to fight to the last Ukrainian."  A few are beginning to speak out, but there must be a crescendo of voices if World War III is to be prevented.  An example of one speaking out is U.S. Senate candidate Diane Sare -- click on this link to watch her confront a chief U.S. War Hawk, Sen. Charles Schumer: 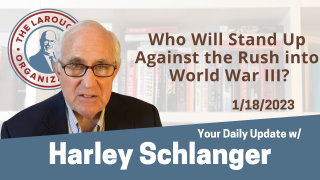