Wake-Up Call to Those Who Live in NATO Countries!!!

This week, the globalist war hawks will move ahead with provocative plans to expand the lethal arsenal being provided for NATO's war against Russia, using Ukraine as a battering ram.  Since neither you, nor your elected representatives, have voted for this, it is time for you to demand that your governments reject war, and act instead on behalf of your nation's sovereign interests.  Otherwise, you become a target as a party of the war.

To understand more about why governments act against their peoples' interests, watch the Schiller Institute conference from January 14. 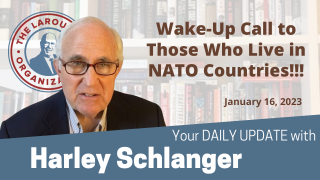