Jan. 14—Sponsored by the Schiller Institute, an online conference titled “Resurrect the True Mission of JFK and Martin Luther King, Jr.: Stop NATO’s World War and Dismantle the ‘International Assassination Bureau,’” presented different facets of the process which began in the 19th century and reached a crescendo of violence in the period following the end of the Second World War. An international oligarchy, faced by a threat to its power, posed by the rise of actual and potential sovereign states, implemented a “strategy of tension” to intimidate political leaders around the world into submission.

The conference opened with a short excerpt from Lyndon LaRouche’s address on Jan. 19. 2004, in Talladega, Alabama, on the immortality of Dr. Martin Luther King, Jr. Then a concise, powerful summary of the current strategic picture was given by Harley Schlanger, Vice President of the Schiller Institute U.S.A. and former national spokesman for Lyndon LaRouche, which set the stage for the next four hours of speeches and discussion. Schlanger warned that we are up against an Anglo-American approach of “foreign policy through warfare.” What followed was an in-depth look at the mechanisms which have been used to suppress political leaders and movements who offered an alternative to this benighted policy.

This process was analyzed from different perspectives, going back to the 19th century. Dr. Clifford A. Kiracofe, president of the Washington Institute for Peace and Development and former senior professional staff member of the U.S. Senate Committee on Foreign Relations, described the emergence during that period of the Synarchist movement, “Synarchism” being self-defined as the antithesis to anarchism. He characterized it as an international brotherhood of financiers and industrialists, an “overworld” that placed itself above sovereign nation states, but collaborated with the “underworld” of organized crime. This tendency favored a “controlled society” as depicted in George Orwell’s 1984, and was central to the intellectual networks which spawned fascism. Following World War II, these networks reorganized themselves, and their heirs will be meeting next week at the annual World Economic Forum conference in Davos, Switzerland, which Kiracofe called a “consensus-building mechanism for the global elites.” As Schlanger pointed out during the discussion period, these networks played a key role in shaping the Anglo-American intelligence services after the war.

The disparate elements of these supranational elites, confronted by the twin dangers of Third World anti-colonial movements and national leaders who tried to assert their nations’ sovereignty, collaborated to form an “assassination bureau.” As Schiller Institute founder and Chairwoman Helga Zepp-LaRouche observed, what followed has been called a “strategy of tension” intended to inject fear into political leaders, so that they would not entertain the idea of a departure from the City of London-Wall Street-dominated system.

A wave of assassinations took place, beginning in the 1960s with the assassination in 1961 of Congolese Prime Minister Patrice Lumumba. Lumumba’s importance was developed by journalist Norbert Mbu-Mputu from the Democratic Republic of the Congo, author of L’Autre Lumumba. Peuple du Congo: Histoire, résistances, assassinats et victoire sur le front de la Guerre froide. He referenced other African leaders who became targets, including Kwame Nkrumah, Laurent Kabila, and Thomas Sankara. During the discussion period, Schlanger added the name of Muammar Qaddafi to that list.

The murder of Lumumba was followed in 1962 by the assassination of Italian leader Enrico Mattei, a Member of Parliament and administrator of the National Fuel Trust (ENI, Italian for “Ente Nazionale Idrocarburi”). Italian EIR journalist Claudio Celani reviewed the recent evidence that Mattei’s death in a plane crash was an assassination, contrary to the initial state finding, and described the motives: Mattei had undermined the dominance of the “Seven Sisters” oil cartel, and had offered actual development aid to the oil-producing nations of the Global South, in addition to more favorable terms (a 25%-75% profit-sharing arrangement, as opposed to the 50%-50% deal favored by the Seven Sisters). Celani went on to analyze other episodes of the “strategy of tension” in Italy, such as the kidnapping and murder of former Prime Minister Aldo Moro in 1978.

One year after the assassination of Enrico Mattei came the assassination of American President John F. Kennedy, followed by the assassinations of Malcolm X, Martin Luther King, and Robert Kennedy. LaRouche Organization leader Dennis Speed took a thorough look at these events. (The JFK assassination has been in the news recently due to Biden’s decision to declassify some of the relevant documents as required by law, but to continue to hold back others.) Speed reviewed some of what is known about the various components of the “assassination bureau,” including the role of Clay Shaw and Permindex (Permanent Industrial Expositions), and the recent addition to this apparatus, the Ukrainian Center for Combating Disinformation (CCD). The last prepared the notorious online hitlist, which has targeted several of today’s conference speakers.

Speed also developed the importance of Dr. Martin Luther King, Jr., whose national holiday we celebrate this weekend. He played excerpts of Lyndon LaRouche’s 2004 Martin Luther King Day address in Talladega, Alabama, in which LaRouche described King as a “man of God,” who deliberately accepted the full implications of that dangerous role.

Ray McGovern, former CIA analyst, whistleblower and co-founder of Veteran Intelligence Professionals for Sanity (VIPS), added additional insights regarding King and other Civil Rights Movement leaders, notably James Lawson. He quoted Fannie Lou Hamer saying, “Sometimes it seems like to tell the truth today is to run the risk of being killed. But if I fall, I’ll fall five feet, four inches forward in the fight for freedom.”

Helga Zepp-LaRouche presented an intensive analysis of the “strategy of tension,” employing the examples in Germany of the assassinations of Deutsche Bank chairman Alfred Herrhausen and Treuhand administrator Detlev Rohwedder, in 1989 and 1991 respectively. Both were in positions of responsibility for economic policy during the German reunification. She said that these killings created a climate of fear in Germany, and that this explains why German leaders today embrace a war policy that runs so directly counter to the interests of their nation. She reported that Col. L. Fletcher Prouty—the former Chief of Special Operations for the Joint Chiefs of Staff under President John F. Kennedy (and the real-life “Mr. X” in Oliver Stone’s “JFK” movie)—had told representatives of the LaRouche organization that Herrhausen was killed because he would present an alternate pathway to the one desired by the Anglo-American elites for the post-Comecon world, and that his killing was as important as the assassination of JFK. She said that Herrhausen’s growing support for Third World debt relief was “the cardinal sin which would cost him his life,” and his death sent a message to then-German Chancellor Helmut Kohl: “Don’t dare to go for a sovereign program.”

Radio talk show host and political analyst Garland Nixon added his insights, describing how, following the Second World War, the U.S.S.R. asserted its dominion over the nations of Eastern Europe through the Council for Mutual Economic Assistance (Comecon). NATO did the same thing, but needed the illusion of national independence, sovereignty and democracy. The Ukraine war has dispelled this illusion, has “lifted the veil.” The trans-Atlantic elites take a view of the citizenry that is no different than the way Prince Harry viewed his Afghan victims, through the sights of his helicopter gunship—they are not regarded as human. These elites feel now that they must stifle dissent in the media and the social media; but this is a basis for optimism, because it demonstrates that they are afraid. “The U.S. empire is at war with modernity,” Nixon said. “It’s like whack-a-mole…. The U.S. is also at war with itself.”

Jacques Cheminade, Schiller Institute founding member and leader, and former presidential candidate for the Solidarité et Progrès party in France, conducted a sweeping review of the oligarchy’s attempts to manage the postwar world. He examined the theory that the 1960 summit conference in Paris between the United States, the Soviet Union, the United Kingdom, and France was intentionally sabotaged by the intelligence agencies, who may have leaked information to the U.S.S.R that enabled them to detect and shoot down the U-2 high-altitude surveillance aircraft. He said that these intelligence services functioned as an integral component of the military industrial complex (MIC), about which President Dwight Eisenhower had warned in his farewell address. (Panelist Ray McGovern has subsequently expanded this concept into MICIMATT, the Military-Industrial-Counter-Intelligence-Media-Academia-Think Tank complex.) Summarizing the significance of the many postwar political assassinations, Cheminade said that the trail of murders was “obviously not a coincidence,” but an action against the “principle of nation-states.” He described the abortive attempt on the life of French President Charles de Gaulle by the OAS (Secret Army Organization in English), another tentacle of the assassination bureau. Cheminade concluded by saying that “de Gaulle and Kennedy, despite their flaws, were giants,” compared to our present-day heads of state.

Well-known political consultant, campaign advisor and Trump confidant Roger Stone offered his own observations on a wide spectrum of topics, including the recent revelation in Politico of a taped conversation between President Richard Nixon and then-CIA Director Richard Helms, in which Nixon attempts to gain leverage during the Watergate scandal by threatening to reveal who had actually killed John Kennedy. According to Stone, several of the Watergate burglars were still on the CIA payroll, and some had been present at Daley Plaza at the time of the JFK assassination.

During the discussion section, the significance of the assassination bureau was summarized in a variety of ways. Claudio Celani said that there is a red line that goes between cases of Mattei, Moro, King, JFK and others: these figures all had a policy in conflict with the oligarchy. Helga Zepp-LaRouche said that the assassinations were intended to create an “aura of terror…. If you assassinate a few people, then maybe the others will be afraid and behave.” Clifford Kiracofe added that the objective of the globalists is to prevent the U.S. from having good relations with Russia and China.

Many questions were sent in over the internet. One question of particular interest was whether there was a connection between the recent assassination of former Japanese Prime Minister Shinzo Abe, and the subsequent announcement of Japan’s remilitarization.

At the close of the conference, Helga Zepp-LaRouche elevated the proceedings by referring to the ideas of the Institute’s namesake, Friedrich Schiller. She said that our opponents, the oligarchs and racists, are like the crippled plants in Schiller’s metaphor, because they are emotionally undeveloped. True happiness comes not from having billions of dollars, caviar and Porsches, but from creativity, from love, from contributing something to humanity—“What you hate, you lose, what you love, you gain.” 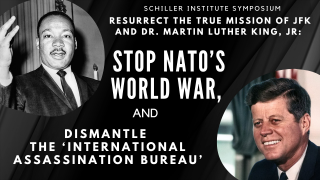