2023: The Epiphany of the Ten Principles

2023: The Epiphany of the Ten Principles

One step away from the nuclear annihilation of mankind, Russian President Vladimir Putin, following the request of Patriarch Kirill, head of the Russian Orthodox Church, declared a ceasefire in the special military operation, beginning at noon on January 6, and ending midnight Christmas Day, January 7. In what acted as a simultaneous commemoration of (Western) Epiphany, Jan. 6, and (Eastern) Christmas Eve/Christmas Day, Putin’s declaration, rejected by Ukraine and NATO, is the fulfillment of a pre-Christmas campaign by thousands of clergy and laity alike, and hundreds of institutions, for the principles of “Peace on Earth, Good Will Toward Men” to be affirmed in a time and place of adversity. It is also a manifestation of the pagan nature of the “principalities and powers” for whom the Ukrainian nation and populace are “collateral damage” in the service of a higher goal—the reduction of the planet’s population by six-plus billion people. That is the new world religion which is intended but which Africa, Asia, South America and many populations of the “Anglosphere” reject. The Malthusian religion of austerity, not prosperity need not be the fate of the planet’s 8 billion. That way surely lies the path to total war. These forces, however, are not omnipotent. In fact, as can be seen by the continued suppression of the JFK assassination files five years after they were required by law to be released, the deadliest of these forces cannot stand the light of day.

The Principles for a New Security and Development Architecture can allow humanity to experience a new birth of freedom. To do so, however, requires the faith that the seemingly impossible can be achieved as was shown in the proclamation of a cease-fire. Learning and practicing the poetic “principle of epiphany” in the face of adversity is the subject of today’s Manhattan Project discussion. 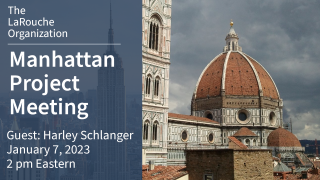