According to leading U.S. neocons, the trillions of dollars spent on wars in the post-Cold War period, and the lives lost, were not only necessary to "defend liberal hegemony", but must continue until Russia and China are defeated as adversaries.  Will you allow the demented worldview of these war hawks to shape your future, and that of your children and grandchildren?  If so, they may not have a future.  Join us for the following upcoming events, to break the U.S. and European governments away from serving as the enforcers of a collapsing Unipolar Order:

• Jan. 8 at 2 p.m. EST: Participate in Diane Sare’s online policy discussion, “Can Nuclear War Be Avoided? Only If the U.S.A. Becomes Trustworthy,” with Scott Ritter, Col. Richard Black, Steve Starr, Helga Zepp-LaRouche and others. RSVP for the zoom link.

Check Schiller Institute.com for links to the following: 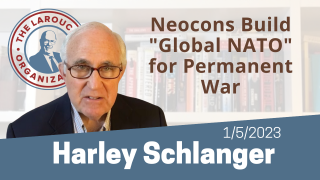