In her weekly webcast today, Helga Zepp LaRouche ridiculed the anti-Russian narratives of NATO leaders, pointing to the broad implications of the admissions, by former German Chancellor Merkel and ex-President of France Hollande, that they never intended to fulfill the agreements they signed in Minsk. They were not just lying, she said — they were violating international law. These are the same people who speak incessantly about the "Rules-Based Order." She said that these admissions led Russian Foreign Minister Lavrov to announce that there is no longer anyone in the EU with whom to negotiate.

In contrast, leaders in the Global South are moving ahead with plans to build an alternative to the neo-colonial Unipolar Order. She cited a Chinese intellectual who said that rather than being in a period of "epochal change", it is more properly a moment of "de-westernization."

This moment requires a "higher level of thinking," which she introduced with her Ten Principles, in which the principle of "One Humanity First" must be the starting point. Reflecting the "divine nature of human beings", this new era can establish humans as a "species of poetry, science and composers." 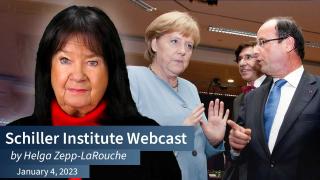