The Arab World Turns to the East!

By Harley Schlanger and Helga Zepp-LaRouche

The visit to Saudi Arabia by China's President Xi Jinping is "part of a new strategic alignment", said Helga Zepp-LaRouche, in her webcast today. "The Arabs are turning east", with more than $30 billion in deals signed. This is part of a new dynamic, which includes explosive growth of the BRICS alliance. This is not a threat to the West, she asserted -- the West should "give up geopolitics...and cooperate," instead of sticking to the failed policies of the past.

Zepp-LaRouche, who was interviewed this week by leading Russian tv personality Vladimir Solovyov, and received the Freedom of Expression award for herself and the Schiller Institute from the Mexican Journalist Club, said she has been encouraged by the response to her proposed Ten Principles for a new strategic and financial architecture. A new chorus of world citizens is coming together, which is the best hope for humanity, in the face of continuing war drive from NATO. 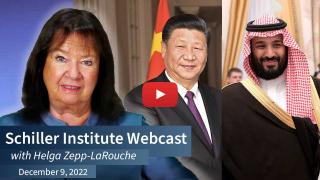