Attempts by Germany's Foreign Minister Baerbock to strong-arm India into submission to the "Rules-Based Order" failed, just as previous efforts by BoJo's government and Blinken failed.  Instead, Indian Prime Minister Modi outlined a perspective for India's presidency of the G20 to promote a "universal sense of one-ness" among nations, with a commitment to break out of the "zero-sum mindset" which he asserted entraps nations today.  In language which parallels the proposed "10 Fundamental Principles" for a new strategic and financial architecture outlined by Helga Zepp-LaRouche, the end of the London-Wall Street oligarchy's post-Cold War Order is now in sight.  Here is a link to an interview with Helga Zepp-LaRouche done by popular Russian Talk Show host, Vladimir Solovyov: 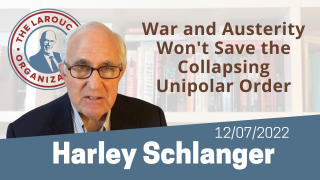