Leading DevelopmentsNew ParadigmLeaflets
There’s a Great Big World Out There Waiting for “the West” To Join It! PDF

Narendra Modi, the Prime Minister of India, an ancient nation whose population constitutes one- sixth of all humanity, adamantly disagrees with that view.

India assumed the presidency of the G20 nations on December 1. In an article published that day on his blog and in the Indian press, Modi wrote that India intends to use the year it presides over that group of diverse nations to help “catalyze a fundamental mindset shift, to benefit humanity as a whole.”

He argues: Humanity has lived until now under conditions of scarcity, fighting over limited resources, and it remains “trapped in the same zero-sum mindset” to this day. That can now change, because “today, we have the means to produce enough to meet the basic needs of all people in the world…. Today’s technology also gives us the means to address problems on a humanity-wide scale.” Achieving that should be the agenda of the G20 process, he stated.

Modi is clear: it is not only that we now have the means to take care of everyone, but it is the fundamental nature of human beings to want to do so. The Prime Minister wrote:

“Some may argue that confrontation and greed are just human nature. I disagree. If humans were inherently selfish, what would explain the lasting appeal of so many spiritual traditions that advocate the fundamental one-ness of us all?”

The LaRouche Organization emphatically agrees! Schiller Institute leader Helga Zepp-LaRouche’s insistence on inspiring the concept of the “One Humanity,” in which all nations participate, is ultimately founded on the last of the ten principles she put forward on Nov. 22 as “food for thought and a dialogue among all people concerned to find a basis for a world order guaranteeing the durable existence of the human species.” Her tenth principle states:

“The basic assumption for the new paradigm is, that man is fundamentally good and capable to infinitely perfect the creativity of his mind and the beauty of his soul, and being the most advanced geological force in the universe, which proves that the lawfulness of the mind and that of the physical universe are in correspondence and cohesion, and that all evil is the result of a lack of development, and therefore can be overcome.”

Modi wrote that “India’s G20 Presidency will work to promote this universal sense of one-ness.” In two meetings on Dec. 5, he proposed to leaders of all of India’s political parties, and also to his own, the BJP, that they join in bringing this discussion to India’s immense, diverse people also over the coming year.

Today, Russia’s well-known economist and currently the Minister in Charge of Integration and Macroeconomics on the Eurasian Economic Commission, Sergey Glazyev, weighed in on this global dialogue. He posted Zepp-LaRouche’s Ten Principles on his Telegram channel, with his comment: “Good suggestions by @ZeppLaRouche on the principles of transition to a new global security system.”

Russian Presidential aide Yury Ushakov likewise opened the annual Primakov Readings Forum with a reference to the new principles giving life to new institutions. “[You] can already say that a new powerful, constructive force is taking shape on Eurasian soil, what can be called the world majority, which defends just and universal principles and approaches,” he said, noting that Africa and Latin America also reject a world order based on “rules determined by whoever,” rather than mutual interest.

Saudi Arabia is preparing to welcome Chinese President Xi Jinping on Wednesday, for a series of meetings this week involving some 30 nations, including a China-Arab Summit and a China-Gulf Coordination Council meeting. China has put on the table its own principles for how to catalyze general development through its Global Development and Global Security Initiatives.

The worldwide discussion of principles which the Schiller Institute’s Zepp-LaRouche sought to provoke is underway, and spreading fast. India, Russia, and China are no small players!

Isn’t it time that Americans and Europeans get off their high horse and join the rest of humanity, as eager partners, in bringing humanity into a whole new epoch, in which nations cooperate for the mutual benefit of each and all?

The global Malthusian oligarchy gathered around the British Crown and its American lackeys view themselves as a separate species, and will not give up easily. But so what? As the English poet and patriot Percy Shelley wrote: “Ye are many; they are few.” 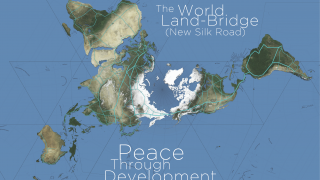