The Present Danger of Nuclear War Confirms what We Have Said: There Is No Peace Without Development

Helga Zepp-LaRouche issued a direct challenge to viewers today, that they join the discussion process underway around what she presented as 10 Principles of a new security and development architecture as a matter of utmost urgency.  There is a “daily escalation” of the war danger, she said, citing Russian Foreign Ministry spokeswoman Zakharova, who said the war in Ukraine is now a war “between NATO and Russia.”

Most people are not getting that this is the real picture.  The process around our mobilization is “exploding”, she said, as increasing numbers of officials have become fearful that world war looms, unless there is a serious effort to end the NATO escalation against Russia.  In her presentation in the November 22 SI conference, she showed why “pragmatic solutions” cannot work, and that it is necessary to go to a higher level, exemplified by Nicholas of Cusa’s “Coincidence of Opposites”.  This means returning to the ideas of the Peace of Westphalia, in which sovereign nations act on the basis of recognition of the legitimate interests of the other — which means not just the absence of war, but the eradication of poverty.
In her concluding remarks, she said, the issue is defining principles under which we can “govern ourselves” — let’s debate this,” insisting that it is not only necessary to approach the problem on this higher level, but possible. 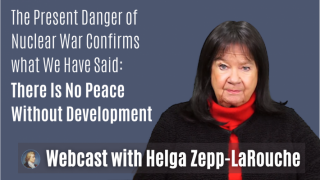