How To Change The Axioms That Lead To War

There has, over the past days, been an acceleration, not deceleration, in what only the foolish still call the “Russia/Ukraine conflict.” Importantly, the war has now been officially characterized by Russia as “the NATO-Russia conflict.” This war is now become, nine months after initiation of the Special Military Operation on the border of the Russian nation, exactly the war that you were assured we would never get into, but which Russian spokeswoman Maria Zakharova has now correctly stated “is a confrontation between Russia and

NATO in Ukraine….The Ukrainian army has long been completely dependent on Western arms supplies, on their intelligence, instructors and mercenaries. It is simply a tool," she has said.

“More and more facts are surfacing that indicate that there is a confrontation between Russia and NATO in Ukraine. More and more military experts from alliance countries are fighting in a dozen private military companies and the Ukrainian armed forces." Given how this escalation, which wasn’t supposed to happen, has in fact occurred, who is to say whether the next stop for the whole human race will not be the next thing that “definitely can’t happen—thermonuclear war?

“Who is to say?” is not a mere question, but a choice. The Nov. 22 Schiller Institute symposium, "Stopping The Danger of Nuclear War," made it clear. The choice is whether to change the governing institutional axioms leading us to “an inevitable doom,” or to be doomed by our choice not to change. 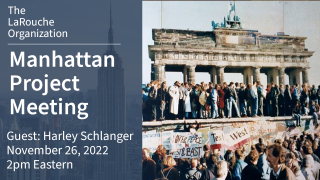