From the time of the American Revolution to today's effort to "defeat" Russia, the role of the British empire has been constant.  If the U.S. is not a colony, bring it in as an ally of the empire.  BoJo is just another figure assigned to keep not only the U.S. in line, but Germany as well, as his interview this week with CNN shows.  The U.S. must break free from British geopolitics, before its deluded leaders bring us into a nuclear world war.

Share this video, and watch the Nov. 22 conference here. 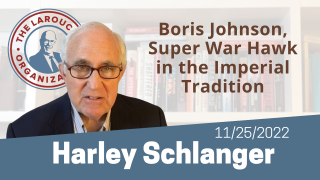