The Lessons from Tuesday's Near-Miss to World War III

Events on Tuesday and Wednesday showed how close the world came to nuclear war.  The forces of corporate interests centered in the London-Wall Street financial cartels and their allies in the Military-Industrial Complex are using war in a futile attempt to quash the rebellion against their intent to impose a new corporatist, i.e., Schachtian fascist, world order.  Still believe a nuclear war could not happen?  Watch the video linked here, and then join our mobilization to create a new security and financial architecture to replace the one which is crumbling in front of the eyes of the whole world: 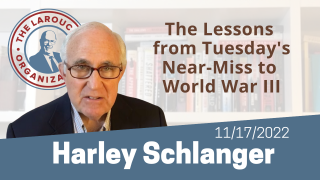