Global NATO Orders A Hit on Advocates of Peace

Aug. 27—Rapid, decisive international action is required to force the closure of the Center for Countering Disinformation (CCD), which operates under and answers to Ukraine’s National Security and Defense Council. A blacklist issued by the CCD July 14, 2022, naming more than 70 leading journalists, academics, politicians, military, and other professionals from 22 countries, as “Kremlin propagandists,” is a hitlist, posing a grave threat to the personal security of those named therein.

Executive Intelligence Review has now confirmed that at least four of those fingered by the CCD are included in the list of “criminals to be eliminated” published by the avowedly fascist “Myrotvorets” gang in Ukraine: Schiller Institute founder and leader Helga Zepp-LaRouche; Schiller Institute spokesman Harley Schlanger; former CIA officer and active anti-war activist Ray McGovern, the co-founder of Veteran Intelligence Professionals for Sanity (VIPS), who has participated in many Schiller Institute conferences; and former U.S. Congresswoman and Democratic presidential pre-candidate Tulsi Gabbard. The Myrotvorets list is reported to have accumulated nearly 200,000 names since it was started in 2014 and, given the difficulties in using its search engine, others from the CCD blacklist may also be on the Myrotvorets hitlist.

Russian journalist Darya Dugina—the daughter of controversial Eurasianist philosopher and political figure Aleksandr Dugin—who was assassinated Aug. 20, was on Myrotvorets’ hitlist. Russia’s Ambassador to the United Nations, Vasily Nebenzia, told the UN Security Council on Aug. 23 that Russia’s “competent authorities” have identified the “perpetrator affiliated with the nationalist battalion ‘Azov’,” and held up a picture of Dugina “from the infamous Peacemaker website” (Myrotvorets), which, he said, “openly flaunts her murder—as you can see, Darya’s photo is overprinted with the inscription ‘liquidated’.” 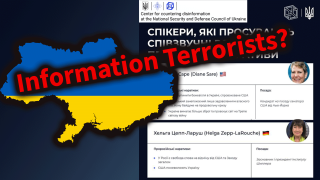