Putin: The SCO Represents Economic Development; The Collapse of the West Is a Result of Their Own Bad Policies

Sept. 18—Russian President Vladimir Putin took time out from his participation in the SCO summit on Sept. 16, for an extended dialogue with the press, in which he discussed the strategic significance of that summit and why it is an alternative to the West’s dying financial system for most nations in the world. According to a transcript made available on the Kremlin website, Putin stated:

“The most important thing always and everywhere is economic development. And the SCO, cooperation with the SCO countries, creates conditions for the development of the Russian economy, and thus for the social sphere and for resolving the tasks related to improving the living standards of our citizens.

“The Shanghai Cooperation Organization includes countries whose population, as has been said many times, comprises almost or even slightly more than half of humanity. It is 25% of world GDP. And, most importantly, the national economies in the region, those of the SCO member states, are developing much faster than others in the world…. India’s GDP grew by 7%, China’s by more than 5%. China was in the lead for quite a time and its potential is tremendous.”

The semi-official Chinese daily Global Times emphasized a similar point in its coverage, quoting Deng Hao, secretary-general of the China Center for SCO Studies, to emphasize: “There are more than 200 countries around the world, the vast majority of which do not follow the U.S. and many are fed up with the selfish and self-serving attitude of the superpower. More countries have asked to join the SCO as they want to get a sense of stability, security and development, that is, a chance to get out of trouble and achieve revitalization.”

Putin at his SCO press conference also blamed the West’s own policy folly for the destruction of its economy. On previous occasions he has focused his attack on the policy of financial speculation as responsible for the collapse of the physical economy; this time he took aim at the crazy “green” deindustrialization policies.

“The energy crisis in Europe did not begin with the start of Russia’s special military operation in Ukraine, in Donbass; it actually started much earlier, a year before or even earlier. As strange as it may seem, it started with the green agenda…. To pursue momentary political considerations, they chose to completely close down the hydrocarbon energy programs in their countries. Banks stopped extending loans, local authorities have stopped allocating land plots for future development, and implementation of plans for energy infrastructure construction was stopped as well, with huge cuts in investment in conventional energy….

“Specialists and experts are perfectly aware of this, and all these populist statements claiming that someone is to blame for this elsewhere are made only to protect themselves from their citizens’ indignation.”

Putin added that the green energy policy is totally “unprepared to meet to the demand for huge energy resources to support economic and industrial growth. The economy is growing while the energy sector is shrinking. This is the first drastic mistake.”

Secondly, the West itself then shut down the flow of natural gas from Russia to Europe, by the deliberate decision to impose sanctions, to stop Nord Stream 2, refusing to meet contractual obligations to maintain compressors for Nord Stream 1, and even simply shutting down the flow of gas through Poland and Ukraine.

Putin argued: “Are we to blame for this? Let them think hard about who is to blame and let none of them blame us for their own mistakes.”

A similar point regarding the policy alternatives facing the planet was on Sept. 11 made by the highly-respected Russian economist Sergei Glazyev, in his message of greeting on the 100th anniversary of the birth of Lyndon LaRouche:

“If the leaders of the world’s nations had listened to the voice of Lyndon LaRouche, then perhaps we might have managed to avoid the social upheavals we confront today as a result of the collapse of the world financial and economic system…. [China and India] have used his thoughts and ideas, for creating their economic miracles. As we can see, countries that are taking this path are enjoying success.” 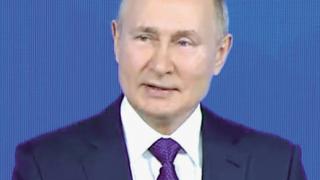