Defend the Right to Deliberate! Speak Out Against Blacklists & the Suppression of the Search for Truth 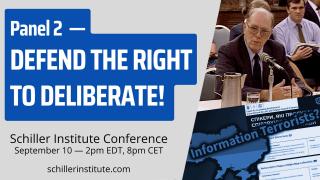