While Russia and Asian-Pacific nations were meeting in Vladivostok to discuss the global shift away from the U.S.-U.K.-EU "Rules-Based Order", courageous journalists and activists spoke at a press conference sponsored by the Executive Intelligence Review, to condemn the threats emanating from U.S.-NATO backed Ukrainian extremists in the "Committee to Combat Disinformation" and "Mirotvorets" intended to silence them.  Why is this scandal, that the U.S. Congress is funding this targeting operation, and that U.S. and NATO officials attended a conference in Kiev where the strategy was presented to deprive Americans of their right to free speech and expression, nowhere to be found in the U.S. media -- even though some whose names have appeared on the target list have been murdered?  The full press conference, which included Diane Sare, Scott Ritter, Ray McGovern, Col. Richard Black, Helga Zepp-LaRouche and others, is available here. 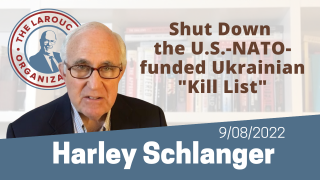