Shut Down NATO’s “Ministry of Truth” and its Hit Lists!

The LaRouche movement has kicked off an international drive to shut down Global NATO’s move to target for assassination any prominent person who dares speak out on the need for a peaceful resolution to war in Ukraine or to establish a new international security and development architecture in which the people of the world can prosper, free from geopolitical tyranny.

Executive Intelligence Review has just completed a preliminary report on this operation, run through Ukraine’s “Center for Countering Disinformation” (CCD) which dared put Schiller Institute founder and leader Helga Zepp-LaRouche on its blacklist of alleged “war criminals” and “Putin lovers,” along with many others collaborating with the Schiller Institute in organizing for a New Paradigm, or simply just speaking out. Already, several of those fingered by the CCD are known to have been placed on the infamous Ukrainian Myrotrovets “kill list,” including Zepp-LaRouche, Harley Schlanger, Scott Ritter, Ray McGovern and Tulsi Gabbard.

The LaRouche Movement does not take such threats lying down! We cannot allow the U.S. Congress to fund kill lists against those who defy Global NATO’s would-be global Orwellian “Ministry of Truth.”

Tune in to this week's Fireside Chat with EIR’s Gretchen Small, a member of the team which produced that report, to find out what you need to know to effectively join us in this fight: how Global NATO’s CCD operation works, what its assignment is, and how NATO, the UK and US fund and direct it. We’ve got actions in motion all over the world, and new plans to announce. 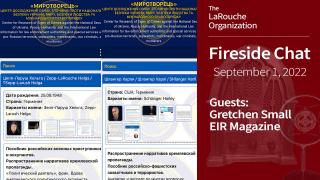