To Understand the “Trump Raid”, Look at the Precedent: The Justice Department’s Decades Long Witch Hunt Against Lyndon LaRouche

August 19—The FBI raid on former U.S. President Donald Trump's home on August 8 has ignited a firestorm of protest, due as much to the failure to provide an adequate explanation of why it was launched now, as to the unprecedented nature of the action itself.  No President in U.S. history has ever been the target of such a legal action.  The announced purpose was to seize classified documents allegedly removed, illegally, by Trump from the White House.  Under the Public Records Act, it is a crime to "conceal, remove, mutilate, obliterate or destroy" government records.  The FBI reports that it seized some two dozen boxes in the raid, with multiple sets of classified documents.

Attorney General Merrick Garland, responding to the highly-vocal protests, released the search warrant which he had signed to approve the raid, citing a "clear and powerful interest" for transparency.  But the release of the warrant raised more questions than it answered, and failed to calm the uproar its execution had triggered.  Republican members in Congress are demanding that the affidavit used to support the warrant be released, as the warrant has been described by legal experts as "open-ended", i.e., designed to allow investigators to seek evidence unrelated to the charges of destroying documents, or possession of classified documents.   Supporters of the former President say that the sole purpose of the raid was to conduct a "fishing expedition" in order to find a crime which could be used to convict Trump, to prevent him from running for President in 2024.

The charge that Trump is a political target is widely believed, especially among his supporters, who point out that no search warrants were executed in previous cases involving the treatment of classified documents, such as that of Hillary Clinton.  The FBI has warned of the danger of political violence exploding in reaction to the raid, citing internet discussion of "civil war" and "armed rebellion".  Given the intense polarization in the U.S., heated up by the highly-partisan Congressional hearings conducted by Democrats of the January 6 "insurrection" in the Capitol, the mainstream media— which had been a full participant in the framing of Trump as a "Putin puppet" in Russiagate— is continuing its role, fanning the flames.

Shut Down the FBI

There have been a growing number of calls for shutting down the FBI, as leading FBI agents were engaged in an open campaign against Trump since he announced for President in 2015.  The FBI has been the focus of the ongoing investigation by special counsel John Durham, who is looking into charges of FBI misconduct.  In particular, opponents of the FBI cite "Crossfire Hurricane", the code name given to the FBI counterintelligence investigation into charges of "Russian interference" in the 2016 presidential election.  It was launched on July 31, 2016, following a briefing by then CIA Director John Brennan to FBI Director James Comey, on "evidence" gathered by various agencies—including from the U.K.'s cyber security agency GCHQ and MI6—of alleged Russian interference.

This so-called intelligence, including the now-discredited dossier of former MI6 operative Christopher Steele, was used by the FBI to obtain a warrant from the FISA Court to spy on Trump campaign official Carter Page, to open a window into spying on other Trump campaign officials.  It was later discovered that the FBI used the Steele dossier as evidence of "Russian collusion", despite knowing it was entirely fabricated.  The top officials involved in Crossfire Hurricane, including the Deputy Assistant Director of Counterintelligence Peter Strzok, attorney Lisa Page, and former acting director Andrew McCabe, left the bureau in disgrace—though have since been hired by mainstream "news" channels as "analysts".

Despite the obvious interference by the FBI into a presidential election on behalf of Trump's opponent, Hillary Clinton, those involved at the top, including Brennan and Comey, have faced no legal consequences for their actions.  Thus, the role of leading FBI officials in the raid of Trump's Florida home -- including some who were involved in Crossfire Hurricane -- confirms the suspicions of Trump supporters that the raid was a continuation of the political hit job against Trump.

The bigger issue than FBI misconduct, however, is that of the role of the permanent bureaucracy of the Department of Justice (DOJ).

The actual precedent for the targeting of Trump was the years-long DOJ/FBI persecution of Lyndon LaRouche, which included a much larger raid on LaRouche's home on October 6-7, 1986 than last week's Mar-a-Lago raid.  More than four hundred law enforcement officials, including armed FBI agents, backed by helicopters and tanks, surrounded LaRouche's home outside of Leesburg, Virginia, purportedly to serve a warrant.  Supporters of LaRouche warned that he might be assassinated during the raid, and only an intervention by top DOJ officials appointed by President Reagan prevented a violent outcome.

The targeting of LaRouche was the culmination of a years-long campaign to eliminate his growing influence, not just in the U.S. but internationally.  LaRouche had been playing a central role in coordinating a campaign against the policies imposed by the International Monetary Fund on developing sector nations.  This came to a head during the debt crisis of the summer of 1982, following his meeting with Mexico's President Lopez Portillo, in which his proposal for launching a "debt bomb" against predatory banks nearly came to fruition.

At the same time, LaRouche was engaged in conducting back-channel negotiations with Soviet officials, on behalf of Reagan's National Security Council.  This was part of an effort to bring the U.S. and U.S.S.R into agreement for joint deployment of the Strategic Defense anti-missile system (SDI), to end the era of Mutual and Assured Destruction.  Reagan's support for the SDI first came to public attention during a televised address he gave on March 23, 1983.  LaRouche had been campaigning for this idea since the late 1970s.

LaRouche's activities were well known to former Secretary of State Henry Kissinger, who wrote a request on August 19, 1982, to FBI Director William Webster, asking that LaRouche and his organization be investigated.  Following the exchange of several letters, and discussion in the President's Foreign Intelligence Advisory Board, the FBI opened a criminal investigation of LaRouche in January 1983, two months before Reagan's announcement of his commitment to LaRouche's proposal for cooperation with the USSR to share in development and deployment of the SDI.

As the FBI "Get LaRouche" operation was underway, candidates associated with LaRouche were gaining support from voters.  In March 1986, two LaRouche candidates won the Democratic Party nominations for Lt. Governor and Secretary of State in Illinois, and supporters of LaRouche were winning local elections.  Seven months later, the FBI raid occurred on LaRouche's home, and he was indicted on a number of bogus charges, which were first presented in a trial in Boston in 1988, which ended in a mistrial.  One of the DOJ officials involved in the Get LaRouche task force and in the Boston trial was Robert Mueller, who later served as the special counsel for the Get Trump campaign!

If citizens had rallied then against the illegal persecution of Lyndon LaRouche, or if Donald Trump had responded during his presidency to appeals to exonerate LaRouche, the present descent into lawlessness, war and economic disintegration could have been prevented.

In the 1995 "Hearings on Gross Misconduct of the U.S. Department of Justice" held in Virginia, the former U.S. Attorney General Ramsey Clark said of the LaRouche case, "But in what was a complex and pervasive utilization of law enforcement, prosecution, media, and non-governmental organizations, focused on destroying an enemy, this case must be number one."

In those same hearings, LaRouche issued a warning, which unfortunately went unheeded: "We have an out-of-control Justice Department, in my view, where the rot is not in the appointees, as much as it is in the permanent bureaucracy.  We have a permanent sickness, in the permanent bureaucracy of part of our government....Always there's that agency inside the Justice Department, which works for a contract, like a hitman, when somebody with the right credentials and passwords walks in, and says, 'We want to get this group of people,' or 'we want to get this person,'...Until we remove, from our system of government, the rotten, permanent bureaucracy which acts like contract assassins, using the authority of the justice system to perpetrate assassination, this country is not free, nor anyone in it."

It is long overdue that the permanent bureaucracy hit teams operating within the DOJ be cleaned out. 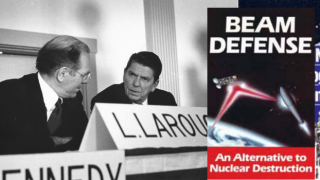