The Triumph of Principle: The Coming Victory of Statecraft Over the Morally Bankrupt "Rule of Law" —

As the result of a vigorous, surgical, and rapid international mobilization, primarily catalyzed by the Schiller Institute, but also taken up on their own by like-minded, though politically distinct individuals, sometime on Thursday afternoon the infamous Ukrainian Center for Countering Disinformation (UCCD) was forced, probably under advisement from increasingly nervous NATO interests, to take down its blacklist ”kill list” of over 70 international figures. Intelligence contacts, including former NSA and CIA analysts, remarked that the successful publication of exposes denouncing the very idea of the blacklist in India, Germany and Denmark, played a major role in the list’s suppression.

It is now essential, however, to widen that breach, and to energetically demand the deeper exposure and even eventual shut-down of the NATO “Ukrainian” operation. One way to do that is to give content to the “newborn” demand of the last three days that the Federal Bureau of Investigation (FBI) be shut down, defunded, cleaned out.

It’s finally time to end the nightmare that descended on the United State November 22, 1963, and that has never ended. Give Lyndon LaRouche the gift of exoneration for his 100th birthday, and the nightmare, and the danger of thermonuclear war will be over. 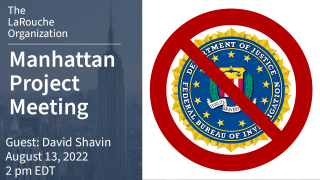