Standard and Poor’s has declared the US and Europe to be in recession, despite Janet Yellen’s deluded claims of recovery. Meanwhile the rest of the world is looking to Russia and China, who are offering real development – Chinese construction of high-speed rail and other infrastructure across Indonesia, while President Joko Widodo is now in Beijing; Lavrov is in Egypt where Rosatom is building four large nuclear power plants which began construction last month.  Bumbling Joe Biden toured the Mideast – Israel, Palestine and Saudi Arabia -- offering nothing but geopolitical coalitions against Russia, China and Iran – achieving nothing. A change in the West is needed – now. 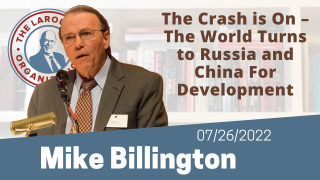