LaRouche Organization History Team researchers Chris Sare and Bob Wesser present a powerful picture of the uniquely American military tradition of nation building, both within the United States and globally. Contrary to agrarian pro-slavery populists like Thomas Jefferson and Andrew Jackson, George Washington and Alexander Hamilton envisioned a future United States where continual scientific and technological innovation driven by the West Point Military Academy's army engineers and aided by government backed credit would be able to create a thoroughly self-sufficient, full set modern industrial economy expanding ever westward. This is precisely the tradition which must be revived today in order for the United States to once again play a positive leadership role. 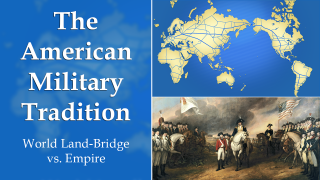