While the sanctions policy against Russia continues to cause fuel and food shortages globally, the primary damage is not in Russia, but in the rest of the world, proving that the actual intent is Malthusian genocide against the entire human race. Helga Zepp-LaRouche issued a call to end the illegal sanctions policy now, and was echoed by the acting president of Sri Lanka, a nation suffering the full weight of the collapse of the western economies. In the lead of the popular revolt against this madness are the Dutch farmers, who now have the support of farmers and others from Germany, Spain, Italy, Poland, and even Canada, targeting especially the equally Malthusian Green New Deal.

Meanwhile the U.S. and the UK foreign policy leaders and finance leaders sabotaged any discussion of the global crisis at the meetings of the G20 in Indonesia. But the world is increasingly seeing through the lies behind this crisis, and are beginning to stand up for truth and justice, following the militant English poet Percy Shelley’s wise words: “Ye are many – they are few.” 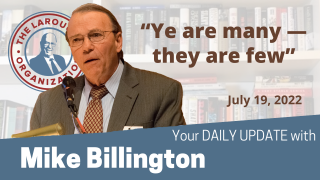