LaRouche and the Spirit of Russia’s Science

At least from April of 1994, American philosopher and economist Lyndon LaRouche was publicly engaged by some of Russia’s top scientists, economists and political leaders in a high-profile dialogue. LaRouche accepted invitations to lecture at the Russian Academy of Science in Moscow, in the State Duma, and at many other Russian scientific venues. The topic was LaRouche’s forecast of the ongoing collapse of the predatory Western financial system, and LaRouche’s design for a new, just international monetary system, based on Leibnizian principles.

Today, LaRouche’s proposals are reflected and debated in public discussions led by President Putin, and by leaders of the Eurasian Economic Union (EAEU), the Shanghai Cooperation Organization (SCO) and the BRICS. On this week's Fireside Chat, Richard A. Black of the Schiller Institute discussed LaRouche’s role in helping to shape Russia’s strategic and science policies today and over the recent several decades. 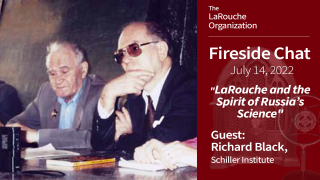