End of the American Century – Build a Century for All Nations

In the past days the government of Sri Lanka, the UK, Italy and Estonia have fallen, and many more are facing economic break down and political upheaval, driven by the rapidly expanding collapse of the western dollar-based financial system. Harper’s Magazine cover story for July reads: “The American Century is Over.” More important, they write, reflecting the policy of the Schiller Institute and its founder Helga Zepp-LaRouche: “The task for the next hundred years will be to create not an American Century, but a Global Century…, in which every nation is dedicated to solving the problems that threaten us all.” 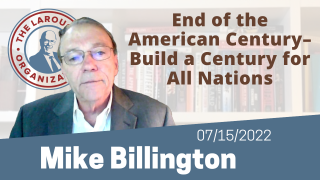